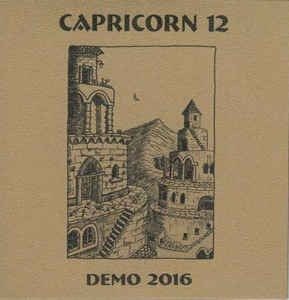 Background/Info: Three years after the debut work “Sometimes I Dream About Lilith” Capricorn 12 strikes back with a new work revealing 5 tracks. Capricorn 12 is driven by Italian artist Andrea Gilardelli.

Content: I remember the previous work as clearly exploring dark-ambient influences. “Demo 2016” sounds a bit like moving on where “Sometimes I Dream About Lilith” stopped. There’re more influences running through the composition, which makes it more diversifed and spiced with experimental and abstract influences.

The tracks progressively move towards mysterious and chilling atmospheres joined by fragments of spoken speeches. It creates a ghost-like impression, which is reinforced by dark vibrations and some sonar-like noises.

+ + + : I like the way the tracks have been patiently built up reaching a dark and tormented sound. The spoken samples create a mysterious and freaky-like atmosphere, which is remarkably empowered by extra, icy noises.

– – – : Some experimental passages and other sound treatments aren’t my favorite aspects of this work. Some cuts also are a little bit too repetitive.

Conclusion: Globally speaking there’s a noticeable evolution from the previous work to this new work. Capricorn 12 clearly doesn’t deal with the average-like formats of dark-ambient music and that’s a damned good thing.

Best songs: White Noise, White Anguish”, “It Seems The Pain Is Not Enough”.