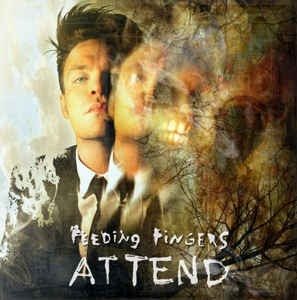 Background/Info: Justin Curfman is a man of many talents. He wrote and published several books, directed stop-motion / puppet animation films and back in 2006 he set up the band Feeding Fingers. The band went through several line-up changes and has now released the 5th opus “Attend” featuring 25 songs.

Content: It’s nearly impossible to categorize this album as one established genre. Curfman seems like exorcizing multiple influences on this double disc. There clearly is a darker new-wave and rock-pop influence, which sounds like the offspring between The Cure, Nick Cave, The Sisters Of Mercy and IAMX. It sounds pretty 80s and at the same time still cinematographic and even into cabaret music. It sounds dark and desperate, but still sensitive and refined.

The refined touch of the composition comes through on the 2nd disc and I here refer to numerous piano arrangements. This is more into ballads and chanson style while still revealing this obscure new-wave influence.

The vocals are a quite noticeable  and essential aspect of the work as well. Justin Curfman is a talented singer who –and here again, might remind you of singers like Robert Smith and Chris Corner. Notice by the way that several guest artists contributed to this work as well.

This album is also available on vinyl format, but strictly limited to 250 copies.

+ + + : There’s a great diversity revealed at this work and that’s also the reason why Feeding Fingers sounds like something totally different from the masses. This band will for sure appeal for a diverse audience, but doesn’t belong to an established genre. That’s precisely what I like and still is one of the band’s main strengths. Musically Feeding Fingers sounds comfortable with every explored influence, but the ‘chanson’ exposure for sure appears to be the most delicate and accomplished one.

– – – : As it’s nearly impossible to label this band it also might be an obstacle to focus on one specific audience. It also is important to fully like the sound to endure 25 songs, which is quite long for a release.

Conclusion: Diversity and creativity both are the main components to describe this beautiful piece of music.