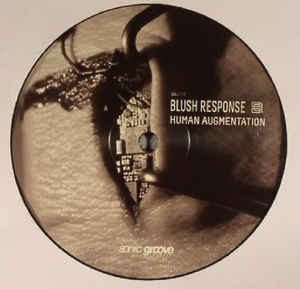 Background/Info: Joey Blush is an American producer who became ‘ein Berliner’. He released his work on different labels such as Ant-zen, Basic Unit Records, Aufnahme + Wiedergabe… and finally joined hands together with Sonic Groove to unleash this new vinyl 12”.

Content: Driven by hard kicks and dark electronic loops, Blush Response is one of those visionary techno-artists who composes music for finer tasting music lovers. The production is overwhelmed by impressive sound blasts, accentuating the cold approach of the artist.

It’s a sophisticated production, which excels on the B-side and finally reaches a transcendental apotheosis.

+ + + : Blush Response is pure sound architecture, built up with brilliant sound treatments and constantly experimenting with dark spheres. The A-side sounds cool, but is nothing more than an appetizer for the phenomenal B-side cuts. “Machine God” and “Instrumentality” both are totally accomplished music pieces revealing the genius of this artist. He mixes different elements, which are even touching acid ground.

– – – : I don’t see real minus points; I prefer both B-side cuts, which clearly excel in sound and global production. The A-side is more a kind of teaser for what’s to come.

Conclusion: Sonic Groove once again proves that it’s a label with a nose for talented and visionary dark-techno driven producers. Blush Response will get you dancing to dark loops and obscure vibes.

Since you’re here … … we have a small favour to ask. More people are reading Side-Line Magazine than ever but advertising revenues across the media are falling fast. And unlike many news organisations, we haven’t put up a paywall – we want to keep our journalism as open as we can. So you can see why we need to ask for your help. Side-Line’s independent journalism takes a lot of time, money and hard work to produce. But we do it because we want to push the artists we like and who are equally fighting to survive. If everyone who reads our reporting, who likes it, helps fund it, our future would be much more secure. For as little as 5 US$, you can support Side-Line Magazine – and it only takes a minute. Thank you. The donations are safely powered by Paypal.
Tags: Blush Response