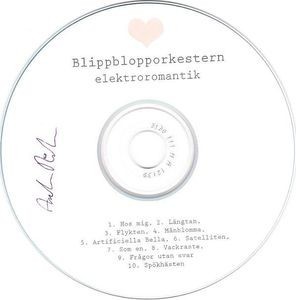 Content: Some of you may already have heard of Andreas Rimheden who was previously involved in Swedish bands like Morticians and Eternity Range.

Blippblopporkestern sounds like a funny and somewhat totally weird name for a project claiming to be inspired by the good-old 80s electronics of bands like The Human League, Erasure, Page ao. One of the main purposes and characteristics is to keep the music simplistic and romantic featuring vocals in Swedish.

I would say that the goal is fully reached although you clearly hear that it’s a debut work. I don’t have anything against simplicity as I’m still convinced it also is the trademark of the greatest hits, but I’m missing a real climax. There’s not this easy memorable melody-line that you’ll keep in mind and it’s impossible to sing along. It doesn’t mean that it’s all bad! I think that some of the vocal parts are still missing a bit of passion so this is for sure a part of the production process to improve.

On the other side I’ve to say that there are some pretty good ideas running through this work and I especially want to mention “Frågor Utan Svar”, which has this typical Swedish touch. This is an electro format reminding me to the glorious days of Elegant Machinery and co and I’m really convinced this is the kind of sound path Blippblopporkestern has to move on with. I especially like the bleeping arrangements, which you also will get back on other compositions.

The songs are pretty quiet and not exactly the kind of electro-pop to get wild on at the clubs. I experience “Elektromekanik” as a kind of try-out, which has to serve as basis to move on with.

Conclusion: I personally liked the work of Morticians so this is probably why I expected a bit more out of this debut work by Andreas Rimheden. But this is another band, another time and another style as well. Let’s see what this band will bring next…