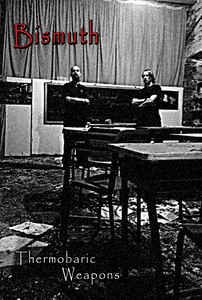 Background/Info: Bismuth is an Italian duo which released 2 productions during 2017. “Thermobaric Weapons” features 2 cuts and is also available on cassette.

Content: Both protagonists take us instantly away into an industrial sound universe carried by drones and featuring multiple noises and an oppressive ambient atmosphere. Zombie-like growls accentuate the disturbing approach of this release.

+ + + : “Thermobaric Weapons” is the kind of release that will appeal for lovers of death-industrial music. It’s a promising work for the way both tracks have been progressively built up reaching a kind of sonic climax accentuated by the vocals.

– – – : Like any other ‘extreme’ sonic experiment, Bismuth is the kind of music that will only appeal for a very restricted number of fans.

Conclusion: Every single music genre has its ‘pioneers’ and main ambassadors, but also promising formations active in the back of the great names. Bismuth is one of them and clearly reveal an interesting potential so you better keep this name in mind.