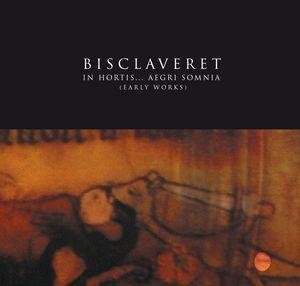 Background/Info: Set up by Radosław Murawski (Thorn) and Maciej Mehring (Dragos) in Gdansk (Poland) this duo released albums on labels like Cynfeirdd, The Eastern Front and mainly Zoharum. This album is a kind of retrospective featuring several songs taken from different albums and a few previously unreleased cuts.

Content: The main characteristic of Bisclaveret is the kind of spooky, haunting sensation emerging from the sound atmospheres and the Polish vocals. You directly feel like you are entering into an imaginary dungeon surrounded by evil spirits. The sound is quite disturbing and still artistic as well. From some poignant piano play to overwhelming, obscure sound layers to a more intimate cabaret style this work is covering different grounds. The industrial noises are empowering the tormenting sensation emerging from this work.

This album is quite diversified and features a nice surprise. Both previously unreleased songs are beautiful and especially poignant songs. It totally matches with the haunting feeling this work reflects. It’s reinforced by the final live songs, which are a bit more into a kind of cabaret style made of industrial sounds, but where the vocals are even more ‘evil’-like.

+ + + : The progression of the song structures with their freaky sound atmospheres is absolutely remarkable while the haunted vocals are accentuating the darkness hanging over the work.

– – – : Some of the ghost-like vocals are maybe a bit too exaggerated to make it sound credible.

Conclusion: “In Hortis… Aegri Somnia” appears to be the sound of possessed souls or just evil musicians who clearly know the dark formula to torment the  listeners.