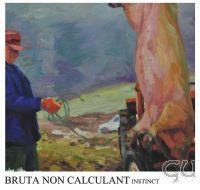 Background/Info: Bruta Non Calculant is the newest project of Alaxis Andreas G (Le Syndicat Electronique) and his brother V-Y (De Frontanel, A.G.E.). This is the 4th full length opus in 2 years, which again has been released on a different label.

Content: The sound is pretty different from Le Syndicat Electronique although there’s a similar fascination and exploration of good-old analogue sound treatments. The global production evokes the golden years of industrial music and without comparing this album with an industrial pioneer, there’s a strong and fascinating 80s touch in the tracks.

The vintage electronic treatments are absolutely well-crafted while some pure industrial guitar empowers the production. Another essential element consists of the vocals, which are often reminding me to Douglas P (Death In June).

Some passages evolve into a kind of electro-wave, but the industrial aspect remains pretty constant and sometimes becomes more bombastic. Notice by the way that the last song is a live version.

– – – : I think that a few cuts could have been a little bit more elaborated, which would have resulted in more highlights.

Conclusion: “Instinct” features a great sound that will bring you back to the magic of the 80s. This album is absolutely worthy of examination.

Best songs: “The True Disciple”, “Blood To The Ground”, “These Voices”, “Through The Dark Valley”.