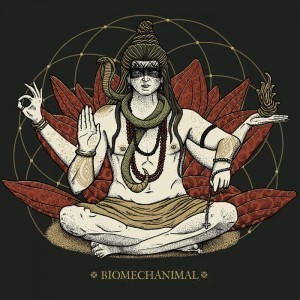 Content: Set up by Matt Simpson who’s taking care of all aspects of the production, the London based Biomechanimal could possible become a real hot newcomer. It all started as a DJ project, but finally turned into a band, which has already performed as the supporting act for real famous bands while remixing bands like Celldweller, ESA, Aesthetic Perfection ao.

So I was really wondering what this album would sound-like. The first tracks reveal a hard-hitting sound moving in between EBM and dark-electronics. I especially like some of the scratching- and other rough sound treatments. The harsh vocals perfectly match with the music. The songs progressively reveal a strong melodic element resulting in several carrying lead parts although I have to say that some of these leads sometimes become a bit too easy-like (cf. like the technoid-minded lead running through “Abyssal Zone”).

But “Biomechanimal” sounds quite diversified and is filled with surprises. “Wasteland” is one of these cool discoveries revealing a complex approach in writing and experimental passages featuring glitch influences. Another attention grabber is “Commonwealth” featuring Cryogenic Echelon & Studio-X. It’s a somewhat unexpected collaboration resulting in an instrumental song driven by great sound treatments and a raw, melodic lead.

A little less surprising is the already known song “Elder Gods” featuring Animus Trax. You might have discovered this song on the latest volume of the famous “Endzeit Bunkertracks”-compilation series. This is a cool and fully representative dark-EBM song characterized by linear sequences and great scratching, icy sounds.
Biomechanimal likes to work with other artists and two more songs feature collaborations (with Ruinizer and Laurie Black). I especially like the female backing vocals by Laurie Black on “Catching Sparks”. This song clearly represents the diversity of this album.

Conclusion: This album is an interesting piece of work featuring multiple cool songs. I’m just missing a hit, which would have made it more promising. This is for sure a band to keep an eye on.