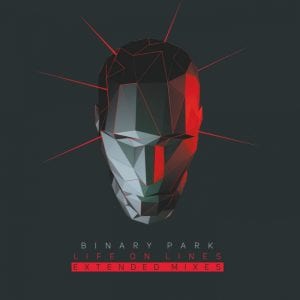 Background/Info: Earlier this year Torben Schmidt –  Alfred Gregl and singer Huw Jones released the third Binary Park album. “Life On Lines” is a sophisticated and high-tech electro-work, which revealed the genius of this trio. And I’ve to say I now like the album even more than when it was just released. This EP features next to an intro six songs from the album all in an extended format.

Content: The main difference with the original songs is that they’ve been seriously extended. I can’t say they’ve been reworked, but you will discover longer instrumental passages like accentuating the visionary sound treatments of this group. While the vocals of Huw Jones are sometimes reminding me of Dave Gahan, the music remains a fascinating fusion between Haujobb, Lassigue Bendthaus and Covenant.

+ + + : This extended version format can be seen as a way to empower the pleasure, at least for all of those who like Binary Park. I think the EP is a nice extra to the original album. I’m still impressed by the sound intelligence of this group, mixing elements of pop, EBM and pure IDM together. The vocals inject an extra sexy touch on top of the production.

– – – : The EP brings nothing really new and is therefore first of all a release for the fans. I would have liked to get an album with totally reworked songs by Binary Park themselves.

Conclusion: This EP is a cool, little extra for all of those who have liked the “Life On Lines”-album. Binary Park is without a shadow of a doubt one of the most intelligent electro-pop formations from the scene or just the most poppy-inspired IDM group.