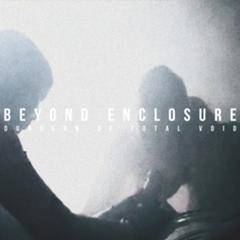 Background/Info: Beyond Enclosure is a Portuguese duo driven by the creative force of Samantha ‘Diabolik’ and ‘The Analyst’. Behind the name The Analyst is hiding Andre Coelho who has been involved in multiple bands, but I especially remember Sektor 304, which was a great dark-ambient formation that released several records on Malignant Records. Beyond Enclosure claims to be influences by S/M, which is a familiar theme they transposed into 8 cuts.

Content: The opening cut sounds like a sonic volcano where the lava has been transposed into a heavy and loud fluid of noises and monotonous sonic waves. The work is made of distorted noises and dark atmospheres while a few spoken words resonate from the depths. Dark blasts and echoing spoken words are awakening the listener’s imagination.

You clearly can’t feel comfortable when listening to this work. The operating desk has been under control of real noise scientists who are producing sharp tones and crashing effects. This album is a real noise turmoil that will hold you in its grip for a tormented experience.

+ + + : I was deeply impressed by the brilliant mix of noise and ambient music. This opus features multiple outstanding cuts, but the absolute masterpiece is “Chain Of Command”. The spooky spoken words create an evil sensation, which is the perfect match with the coldness of the music.

– – – : There are no real elements of the production to improve, however it remains an album strictly limited for lovers of extreme music genres.

Conclusion: Beyond Enclosure definitely is one of the most talented new-coming bands of the wide Malignant Records roster. S/M clearly remains a very inspiring theme!

Best songs: “Chain Of Command”, “Autoerotik Punishment”, “Into The Dungeon”, “Vortex Of Steel Into Flesh”.