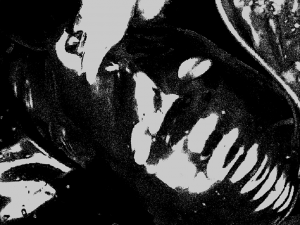 The Portuguese duo Beyond Enclosure recently released its debut-album “Dungeon Of Total Void” on the American label Malignant Records. The band has been set up by Samantha ‘Diabolik’ and ‘The Analyst’ (aka Andre Coelho) who was previously involved in Sektor 304. Beyond Enclosure composes a tormenting sound mixing noise and obscure ambient atmospheres together while getting  influenced by S/M.

Q: How did you guys met and what have been the common elements and taste to set up Beyond Enclosure?

Q: Your debut-album “Dungeon Of Total Void” has been introduced as a ‘homage to discomfort, pain, and pleasure’ so what is it all about?

Samantha: It’s a way of living.

Q: S/M & fetishism are quite common themes in the underground scene so aren’t you afraid all has been already said about it? Where’s the difference with this album?

Samantha: Any theme related with fetishism and erotica has no boundaries. It’s a never-ending source of inspiration and research. All you can try is to be original in order to fulfill your own needs.

Q: How did the composition and production of the album happened and how was it working together?

Samantha: It was actually a very fluid and also intense process. I found some lost tapes in my basement, something that I’ve recorded while I was fistfucking some old synths for the first time and showed them to The Analyst. He was particularly overwhelmed by those recordings and we decided to chop them off and start something new out of it.

Q: What according to you are the strongest elements of the album and are there some aspects you want to improve?