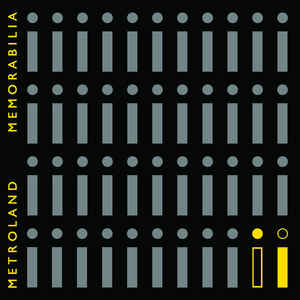 Background/Info: Metroland became a band that doesn’t need any further introduction. The Belgian ‘Kraftworkers’ released this new EP featuring an exclusive title song plus an exclusive B-side cut. Both songs aren’t taken from their this year released fourth opus “Men In A Frame”, but they however touch ground with the artistic concept about music that they composed for pictures made by 8 photographers. Next to the “Memorabilia”-EP there also is the ‘remixed’ edition featuring 3 remixes.

Content: “Memorabilia” clearly sounds like an EP-title track. Both ‘passengers’ get back to the Belgian new-beat genre (late 80s – early 90s) to mix a devastating bass line with their familiar Kraftwerk-pop music. The EP also features an alternative, extended “Souvenir Mix” plus a B-side cut entitled “Sunwriting” revealing the typical Metroland-style and its robotic vocals.

“Memorabilia Remixes” brings remixes of the title song by German producer Zusammenklang and a remix of “Heliograph” by the Swedish duo Datapop. Metroland also accomplished another edit of “Sunwriting”.

+ + + : Speaking for myself I think “Memorabilia” is one of the best cuts ever composed by Metroland. The fusion between the terrific and new-beat sounding bass line and their Kraftwerk-inspired electro is absolutely phenomenal. The remixes by Zusammenklang and Datapop are pretty cool as well, adding each a little extra to this EP. “Sunwriting” also is a cool B-side track. But what I especially like is that Metroland now released their second EP in the “Men In a Frame”-period with an exclusive title song. “Memorabilia” also is more danceable –or should I say less experimental, than their last album.

– – – : My only regret is that “Memorabilia” is only available on digital-format. This is the kind of song that really deserves to be released on CD and/or vinyl format.

Conclusion: Metroland has already accomplished great things and this EP is just one more item we can add to the list. Metroland seems to have no limits so nobody knows where those Belgian electro-scientists will end!