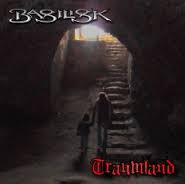 Content: The German formation Basilisk has been active since the late 90s and has released several albums and other productions. Despite of their long-time involvement Basilisk is not exactly the most common name active in the wider fields of metal music.

They joined Echozone to release their new opus inviting the listener to enter an imaginary world in between dreams and reality. This universe has been transposed into a metal-minded sound, which takes off with heavy guitar riffs and accomplished by electronic arrangements. The vocal parts are mainly clear-like although rougher backing vocals add a naughty touch to the production. The majority of the songs have been sung in English, but despite of the band’s efforts to catch a wider audience it all remains a bit too predictable and without real highlights.

The songs are easily listening metal music, but I’m missing a real spirit. Basilisk explores the wider fields of metal music while crossing the path of rock- and gothic music. Even a cover version of German living legend Falco can’t really awake my interest. “Out Of The Dark” is a cool cover version, but once again without climax.

The final song “Der Pakt” sounds a bit quieter and even moving on the edge of folk elements. It’s not bad although nothing really ground breaking.

One of the few real interesting songs is “Verstanden”. This cut is carried by a solid chorus, which is an essential element of a successful song. That’s precisely what most of the songs are missing. I have to admit that the electronic parts inject some extra doom-like atmosphere, but that’s definitely not enough to be satisfying.

Conclusion: I think we might expect a bit more from a band that has been active for years now. “Traumland” will probably please to some nice-minded metal freaks, but globally speaking this album is undermined by a serious lack of genius.