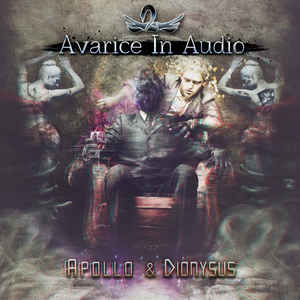 Content: “Apollo & Dionysus” sounds more open-minded than their debut full length, but still appears to be very challenging. Avarice In Audio experiments with solid techno blasts mixed with harder and industrial-minded sound treatments. The songs are powerful and reveal multiple sound manipulations. There’s a perfect balance between the different influences, but in the end I would say it clearly sounds more into techno and dance music instead of industrial.

The harder industrial treatments make it all more underground-like and darker while the beating kick will bring dancefloors on fire. There’s certain bombast running through the songs while a few other cuts are softer and more into a kind of reverie. Most of the vocals are rather powerful and passionate.

One of the main particularities of the work is the contribution of guest artists like Damasius Venys (Mondträume) and Mr. Kitty performing guest vocals, Chris Anderson and Mixe1. The last song of the regular album is an interesting new version of “The Cassandra Complex”, which was originally released on their debut album.

The 2nddisc features 13 remixes by an interesting list of artists. Studio-X, iVardensphere, Nitro/Noise, Alter Der Ruine, Panic Lift, Ludovico Technique, Biomechanical, Freakangel, Terrolokaust, Die Sektor, Sirus and less familiar [Snuff] and Kult Of Red Pyramid clearly are a nice selection of promising remixes. Speaking for myself I have a preference for the remixing skills of iVardensphere, Alter Der Ruine and Sirus.

+ + + : This album reveals a great progression in sound and global production featuring impressive sound manipulations. The industrial-dance style is powerful and carried by passionate vocals. The extra disc features a nice cocktail of cool remixes.

– – – : The techno input is cool, but I regret some cheaper techno blasts, which are a bit cliché. The softer tracks aren’t the most convincing ones. I’m also missing a real great hit.

Conclusion: “Apollo & Dionysus” is an accessible and well-crafted work although not exactly the most evident release to please a darker audience, which is not always that wild of techno experiments. This work is not for purists, but for open-minded souls in search of great, danceable vibes.

Since you’re here … … we have a small favour to ask. More people are reading Side-Line Magazine than ever but advertising revenues across the media are falling fast. And unlike many news organisations, we haven’t put up a paywall – we want to keep our journalism as open as we can. So you can see why we need to ask for your help. Side-Line’s independent journalism takes a lot of time, money and hard work to produce. But we do it because we want to push the artists we like and who are equally fighting to survive. If everyone who reads our reporting, who likes it, helps fund it, our future would be much more secure. For as little as 5 US$, you can support Side-Line Magazine – and it only takes a minute. Thank you. The donations are safely powered by Paypal.
Tags: Avarice In Audio, Freakangel, iVardensphere, Nitro/Noise, Sirus, Studio-X, Terrolokaust