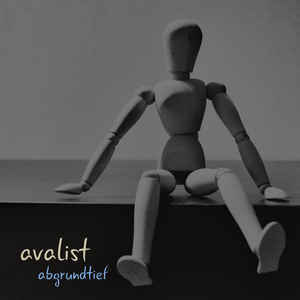 Background/Info: It’s possible that not too many people will remember Avalist. This is a German band driven by the creative mind of Daniel Scharf. I noticed that the band already released a production on Alice In… somewhere in the midst of the 90s (cf. “The Entire Silence”), but you maybe remember the musician from other projects like Misantrophe and Distance. Avalist is back on track delivering a full length album of 13 tracks.

Content: “Abgrundtief” is a beautiful and passionate work taking off with a neo-classical inspired piece, but rapidly moves into more gothic-minded compositions carried by slow rhythms and broken drums. The sounds are rough while the atmospheres are rather dreamy. Piano arrangements add the final touch.

This work is intimate and sometimes cinematographic-like. Daniel Scharf sings in his Mother tongue, which reinforces the typical German gothic style, which sometimes reminds me of Endraum.

+ + + : Gothic inspired music can be still exciting. Avalist has achieved an intelligent opus revealing great diversity. The somewhat neo-classic input running through a few cuts is absolutely successful and a real lust for the ears. From the Endraum-like title song to the beautiful melancholia shown on “Unwahr” to the neo-classic opening cut (cf. “Sinnlos”) to the film-minded “Wozu Noch” this album has a lot to offer.

– – – : Avalist is not just focusing on one established style and that’s maybe what will hurt some people. I don’t have any problem with diversity, but “Abgrundtief” maybe sounds a bit like an artist exorcising several different ideas.

Conclusion: This album is more than simply a comeback for Avalist, but a truly accomplished, serene and artistic opus.