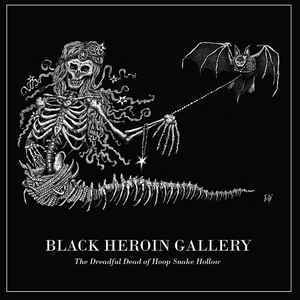 Background/Info: Alice In… welcomes the American formation Black Heroin Gallery. They released an EP (cf. “The Rotting Flower”) in 2015 and now signed to Alice In… to unleash their official debut full length album. The work features the songs previously released on the EP plus new cuts as well.

Content: The sound of Black Heroin Gallery is clearly inspired by the 80s and legendary bands like Bauhaus and Virgin Prunes are possible sources of inspiration. The deep resonating bass accentuates the darkness hanging over this work while the somewhat vampire-like timbre of voice of singer E. December Joseph only reinforces the ‘bat cave’ atmosphere. The fuzzy guitar parts are another typical characteristic of this formation awakening old new-wave spirits. The songs also have been accomplished with keyboards as well.

+ + + : Black Heroin Gallery has found the ingredients to compose a successful gothic production in the purest tradition of the pioneers in the genre. The dark atmosphere and theatrical singing reminds me of Bauhaus and Virgin Prunes, which I think are more than simply references. The main strength of this work is not that in the power, but in the cold and obscure atmospheres. The bombastic drum parts add an extra dramatic flavor to the work.

– – – : Black Heroin Gallery doesn’t reinvent good-old new-wave music, but just are talented inspired musicians. This is a successful debut album, but I think they have the potential to do better and especially accomplishing a hit.

Conclusion: Black Heroin Gallery lets us discover imaginary dark cellars and wet caves from Hollywood. This is the perfect antidote to the Californian jet set and I like it!

Best songs: “As She Slumbers”, “His Beautiful Darkness”, “The Worm Prince (Of Black Toad Hollow)”.