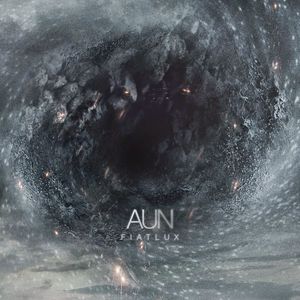 Content: Martin Dumais became a real busy sonic bee having released an impressive list of productions in less than a decade. While most of his work was released in his homeland Canada by Oral, “Fiat Lux” saw the artist move back to Cyclic Law (another Canadian label).

“Fiat Lux” is an invitation to travel through an enigmatic sound universe, which definitely appeals to a strong visual power. It’s not exactly the most common dark-ambient release as Aun is a rather atypical project covering multiple influences. I already heard harder and sometimes industrial-inspired work by Aun while this opus reveals a softer and I dare to say more sophisticated writing. There’s a constant twist between classical dark-ambient influences and minimal electronics empowered by some down-tempo rhythm patterns. You feel as if you are getting lost in the midst of a misty sonic trip, which accentuates the strong soundtrack-sensation of this album. “Radiation” is an impressive cut in the genre for its progression in sound accentuated by cold sound waves hanging over the work. I also highly recommend the dense atmospheric and foggy sounding “Dark Energy.”

But I definitely prefer the 2nd part of the album, which is characterized by an intelligent writing and a more minimal style. “Crystal Towers” is an intelligent piece of music featuring the different sources of inspiration this album has been made with. There’s a strong evasive side leading to dark sound areas while electro-ambient arrangements and a down-tempo rhythm will possibly fascinate you. I here also experienced a kind of dubby touch emerging from the rhythmic cadence.

Both tracks left are rather similar and confirm the atypical sound of this work. There’s a great ghost-like touch running through “Resistance Underground” while the final track “Voodoo” clearly refers to the darker and mysterious side inspiring Aun.

Conclusion: I like the unconventional style of this work, which can’t be defined as a stereotypical dark-ambient release. The diversity of influences for sure is one of the main strengths of “Fiat Lux.”

Since you’re here … … we have a small favour to ask. More people are reading Side-Line Magazine than ever but advertising revenues across the media are falling fast. And unlike many news organisations, we haven’t put up a paywall – we want to keep our journalism as open as we can. So you can see why we need to ask for your help. Side-Line’s independent journalism takes a lot of time, money and hard work to produce. But we do it because we want to push the artists we like and who are equally fighting to survive. If everyone who reads our reporting, who likes it, helps fund it, our future would be much more secure. For as little as 5 US$, you can support Side-Line Magazine – and it only takes a minute. Thank you. The donations are safely powered by Paypal.
Tags: Aun