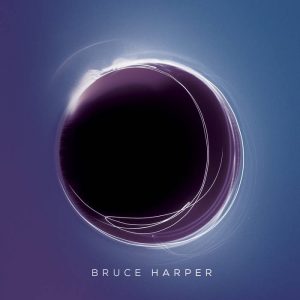 Background/Info: Bruce Harper is an Italian trio. The members are still active in other common projects like Floss, Teich and Beech. This self-titled and self-released work also is the debut album under the Bruce Harper moniker.

Content: It rapidly appears that the common element between Bruce Harper and the other projects are the members being involved with the ‘psychedelic’ element. But there’s much more than simply a good-old psychedelic work. The ambient passages are pretty dreamy-like while electronic repetitive loops have something more down to earth. Nearly all the album remains instrumental, but I noticed a few female chants/voices and a last track with vocals, which have been more used as an effect. The real drums are a noticeable characteristic of this album. Bruce Harper is bringing different influences together.

+ + + : I like the space-like and psychedelic input of this work and I even regret it has not been  a bit more explicit. The work features cool electronic treatments and cool bleeps. The few cuts with the vaguely presence of vocals inject something extra to the work. “Whales” and “Fluo Rites” both are cool cuts in the genre.

– – – : I’m missing some extra elaboration on a few cuts while the mainly instrumental approach of the band is for sure deliberate, but maybe something they have to reconsider on further works.

Conclusion: It really feels like Bruce Harper has a potential, but globally speaking the work sounds a bit unaccomplished and missing a climax!