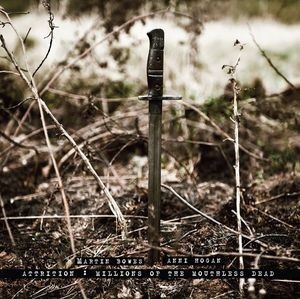 Content: Martin Bowes is a musician of many talents. This UK veteran of the electronic & industrial scene has a real creative mind, which inspired him to release a deeply intimate –and somewhat emotional, conceptual release.

“Millions Of The Mouthless Dead” has been inspired by Martin’s grandfather William Bowes who was a soldier during the terrible ‘Great War’ (1914-1918). The man got wounded, but he got repatriated to England where he stayed and recuperated for the remainder of this terrible war. Martin Bowes dedicates this work to his grandfather and all the victims of this horrible tragedy. I think it’s an interesting release in times where Europe is going through severe political- and social crisis.
The album was accomplished together with Anni Hogan. Several guests who are mainly narrating have been invited as well. You’ll discover poignant poems about the Great War, which have been adapted into music. One famous narrator is French artist Peter Rainman who speaks in his Mother tongue. But the most famous narrator is without a shadow of a doubt ex-Kraftwerk member Wolfgang Flür. Bowes and Hogan contributed to a few tracks as well.

This conceptual release rapidly appears to be a mix between pure cinematographic compositions and experimentalism. It’s the kind of work that has been clearly composed to support a strong visual production. The only images we get are the black-white postcards included in the limited edition, which here again are homage to Bowes’ grandfather.

The album is quite diverse, but several passages clearly appeal for a visual strength evoking the horror of war. “Shellshock” is one of the heaviest cuts in the genre, giving you the feeling of being on the battlefield. There’s a lot of drama accentuated by epic passages and numerous field recordings (or samplings) getting the listener into tormented state. The few poems interpreted by some of the guest vocalists create a particular atmosphere, which once again reflect horror and death.

Piano-like arrangements and passages emerge at a regular basis. Here again you get the impression Bowes and Hogan simply try to reproduce the atmosphere of the early 20th Century. You’ll notice many samplings from radio news, cracking sounds, screaming crowds or a passage with bagpipes. Other cuts lead the listener into an apocalyptic atmosphere where he got surrounded by heavy sonic outbursts, exploding blasts and disturbing noises.

This work can be seen as a real compact entity where every single song is just a small piece of a bigger entity. Notice by the way that this album released by Ultra-Mail Prod. Is strictly limited to 300 copies.

Conclusion: This is not exactly a kind of ‘feel-good’ opus, but a deeply artistic creation, which clearly appears to be an emotional homage to one of the darkest periods of the early 20th Century.