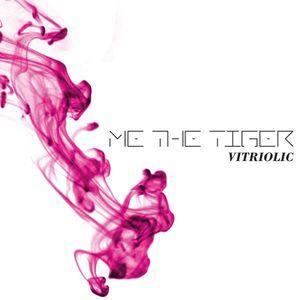 Content: Me The Tiger sounds a bit like a weird name for a band, but you’ll easily keep it in mind if you’re into electro-pop music. It’s hard to say if Repo Records has signed the next big revelation in electro-pop land, but this Swedish trio has totally convinced me.

“Vitriolic” features 12 songs, which have been composed with great electro-pop vibes and reinforced by guitar. Both elements together create a powerful symbiosis, which especially comes through at the choruses. I think we might speak about a kind of ‘power-pop’ music.

There are many interesting elements running through the album. There’s a kind of dark mood hanging over the songs, which makes me think of The Birthday Massacre, but in a pop mood. The song “What Promises Are Worth”, which has been released as title song of a digital EP, makes me think of a kind of shoegaze-pop music. There’s this sexy and dark fuzzy input, which you don’t exactly expect in this kind of music. It definitely stands for the creative side of this band.

“Apart” is another song that caught my attention. The dark aspect of the track reminds me a bit to a dark sequence, which could have been composed by Suicide Commando. I also have to mention a kind of experimental treatments, which are noticeable in “We Sell For Free”. Me The Tiger has its very own approach in sound and that’s what makes the strength and originality of the work.

I also have to say a word about their female vocalist, which is definitely the secret weapon behind this band. Gabriella Åström is a talented singer who can switch from a rather fragile timbre of voice towards a passionate and charismatic singer. The production of the vocals is totally accomplished and you can hear this front woman literally carrying the songs by the magic of her voice.

Conclusion: “Vitriolic” is a refreshing and powerful exposure from a creative band, which clearly avoids walking on old-fashioned pop paths. This is a band to discover and keep an eye on.

Best songs: “What Promises Are Worth”, “Apart”, “Heartbeats”, “Myheroine”, Like Feathers”.