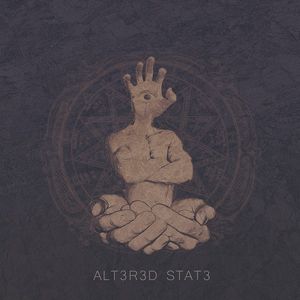 Content: Behind Alt3r3d Stat3 hides Terry Holifield. You might have discovered this English artist with the famous “Cthulhu – A Cryo Chamber Collaboration”-CD which featured a collaboration between 12 bands.

“Dubbed In Black” is the debut official album by this project, which clearly invites us to join dark atmospheres made of field recordings and numerous sound treatments. It’s a freaky experience where I noticed a rather elaborate writing style. The music moves into ghost-like passages, which are sometimes empowered by spooky vocals and/or whispers.

The album consists of 9 tracks, which progressively reach their ultimate state of terror at the finale. We are moving towards aquatic noises and agoraphobic passages reinforcing the visual strength of the work. The overwhelming sound layers excel all over the work, but reach their climax on “Prayer”. This is a damn chilling experience in sound and the only regret is the short duration of time for this masterpiece (less than 3 minutes). The upcoming track “The Practice” is a great track as well. The sound treatments accentuate the imagery of the work, which is dominated by a flat resonating monitor sound and humming sound blasts.

Conclusion: “Dubbed In Black” is a well-crafted debut for Alt3r3d Stat3 where I especially was impressed by the elaborate writing of the compositions.