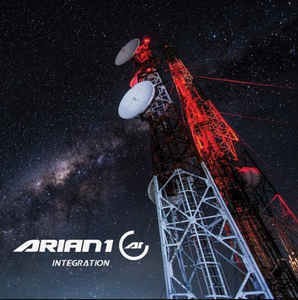 Background/Info: The brothers Eduardo and Cesar Leiva are the instigators behind Arian1, which is one of the most renowned and oldest electronic formations from Latin America. Hailing from Lima (Peru) both brothers have already been active for quite a long time, but Arian1 for sure appears to be their most successful band giving them the opportunity to play in Europe. “Integration” is a real opportunity to get more familiar with their music as it’s a ‘best of’-release featuring 17 songs.

Content: The songs clearly reveal a solid future-pop inspiration, which is characterized by great leads and melodies. But there’s much more than simply future-pop music running through this band. They also experiment with elements of EBM and deep bass lines reminding to psy-trance music.

Arian1 also reveal to be great sound manipulators, which on a few cuts even remind me of Seb Komor. Last, but not least I also have to say a word about the vocal skills of Eduardo Leiva, who sometimes reminds me of Stefan Netschio (Beborn Beton).

The album features a few alternatives (re)mixes from songs that were originally released on the debut album “Immersion” or the “Cyro”-EP released earlier this year.

+ + + : You don’t exactly expect to hear electronic music made in Lima, but Arian1 is an alluring electro formation that has discovered the right sound formula to make you dance. The songs mix different electronic elements resulting in melodic and danceable songs. Next to some typical future-pop inspired song Arian1 also reveals great skills to compose raw body-pop tracks, which are my favorite cuts.

– – – : The future-pop influences maybe aren’t the most original ones, but you don’t hear me complain. The main point for this band probably must be the geographical one as it’s not easy for a Peruvian band to reach a wider audience!

Conclusion: If you like different electro-pop formats, just try Arian1 which is a less recognized, but sensational formation in the genre. This ‘best of’ is a brilliant piece of music.