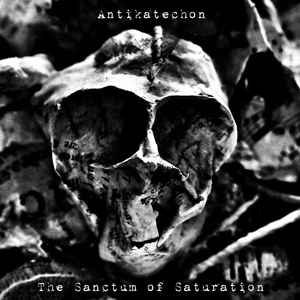 Background/Info: Italian artist Davide Del Col is back on track unleashing the fifth solo-album of his sonic brainchild Antikatechon.

Content: This new opus features only 2 long duration cuts. The artists takes you away in a shimmering sound universe featuring a truly arsenal of noises and rough sound treatments. There’s a slow progression operating. The second cut is more noisy-like and accomplished with a kind of Eastern-like guitar playing.

+ + + : There’s a great, overwhelming sound wave running through this work. The progressive evolution of the tracks ends into a cool electronic sequence at “The Stations Of Servitude”. The next cut “The Sanctum Of Saturation” sounds more minimal-like, but here again Antikatechon brings a fascinating input by this mysterious eastern-like atmosphere.

– – – : Both cuts are easily going over the 20 minutes, which also create some monotonous passages.

Conclusion: Antikatechon remains a fascinating project, which sounds as a solid sonic bridge between dark-ambient and cinematographic music.

Best songs: “The Sanctum Of Saturation”