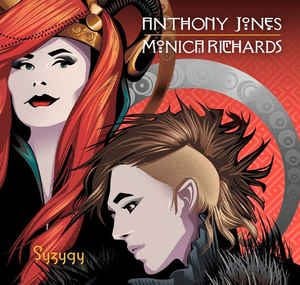 Background/Info: “Syzygy” is the meeting between Anthony Jones (Monastic) and Monica Richards (Faith And The Muse). Both artists know each other for quite a long time and decided to a special live show together. This concept inspired them to release a few songs together, which are like a real artistic fusion between original songs from both singers.

Content: The concept is somewhat weird, but the result makes sense. We get a hard to define sound approach mixing electronics with trip-hop rhythms, cinematographic spheres, medieval influences, tribal elements and last, but not least the vocals of both singers. Monica Richards injects her graceful and magic ethereal touch to the work.

+ + + : It’s absolutely crazy to imagine 3 original songs from Anthony Jones and 3 other original songs from Monica Richards, which have been all adapted and reworked into something new. The sound is hard to define, but I think we might speak about a very open-minded work revealing multiple influences. I remain a true admirer of Monica Richards’ elevating vocal performance, which literally excels on, “The Siren’s Lament”. But I also have to mention “Vervain As My Guide” for the beautiful duo between both singers. Last, but not least “A Good Offering” has something tribal and dance-like as well.

– – – : It all started as a crazy concept and that’s a bit noticeable when hearing this work. There’re maybe too much ideas and influences running through the tracklist, but at the other side it’s the kind of work you can only realize with such crazy projects.

Conclusion: “Syzygy” probably is the kind of project that has been never accomplished before, but when you put two great and talented artists together you only, but can expect something truly entertaining.

Best songs: “The Siren’s Lament”, “A Good Offering”, “Vervain AS My Guide”.