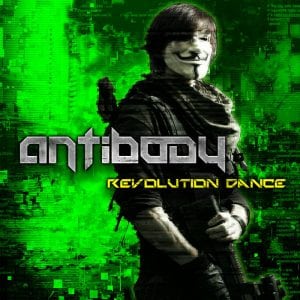 Background/Info: Jan Laustroer is a German teenager dealing with dark-electronics. He probably is one of the youngest artists active in the scene and can already look back at a few noticeable self-released productions. He’s also involved with Gen-ZX, which is a new band he set up together with Frame Of Mind-singer Marco Hein. Antibody now joined hands together with DarkTunes to unleash this new opus. The CD format is strictly limited to 100 copies.

Content: Previous works revealed cool ideas, but this new opus is more mature and elaborated. Antibody clearly sounds inspired by dark-electronics, but also with raw- and sometimes hard technoid elements. Some songs are still instrumentals (like the previous album), but a few other cuts are featuring guest vocals by Technolorgy and Avarice In Audio.

The final chapter of the album features remixes by Grendel, Cyferdyne, Kant Kino and Cease2Xist.

+ + + : As I already mentioned most aspects of the writing and production have been improved. Jan Laustroer can be considered as a little genius. I can’t remember such a young guy making this kind of music. It’s not all good and efficient, but this work makes sense and features multiple cool songs. I have a preference for the sung tracks injecting extra power to the song. Antibody is perfectly mixing different influences and I like his dark-techno approach on top of the dark-electronics. The remix of “See Them” by Grendel is a real great piece of music, but I also have to mention Kant Kino, which did a great remix of “Ouroboros”.

– – – : The main challenge for Antibody will be to find a singer or just go on composing instrumental songs with some spoken samplings. But you can hear some songs simply need a vocalist.

Conclusion: I can’t say this album is an absolute ‘must have’, but this teenager took me by surprise composing such cool music. He can only become more experienced and talented so the best is yet to come.

Since you’re here … … we have a small favour to ask. More people are reading Side-Line Magazine than ever but advertising revenues across the media are falling fast. And unlike many news organisations, we haven’t put up a paywall – we want to keep our journalism as open as we can. So you can see why we need to ask for your help. Side-Line’s independent journalism takes a lot of time, money and hard work to produce. But we do it because we want to push the artists we like and who are equally fighting to survive. If everyone who reads our reporting, who likes it, helps fund it, our future would be much more secure. For as little as 5 US$, you can support Side-Line Magazine – and it only takes a minute. Thank you. The donations are safely powered by Paypal.
Tags: Antibody, Cyferdyne, darkTunes, Gen-ZX, Technoid, Technolorgy