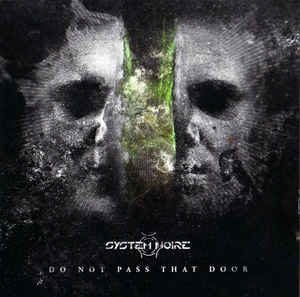 Background/Info: Björn Miethe (vocals) and Daniel Gosewisch (machines) are System Noire. This German duo previously released a few EP’s (“On The Other Side” was released on DarkTunes Music group) and has now unleashed their official debut full length.

Content: The music is clearly inspired by dark-electro standards. They clearly pay some attention to achieve simple, but carrying melody lines. The album is alternating mainly dark-electro driven cuts and a few softer cuts. I also noticed a few instrumentals.

System Noire also likes to work with guests. They already did it on their debut single “On The Other Side” featuring Henrik Iversen (NamNamBulu) and now composed a song together with SynthAttack while other songs are featuring Unterschicht and Alien Nation. Remixes have been done by Ruined Conflict, XMH and ES23.

+ + + : This band deals with a rather easy and somewhat simplistic dark-electro format, which is however rather pleasant to listen to. The harder cuts definitely are the best ones and I especially want to mention “Voices” featuring Unterschicht and “Viaie Introspectivo feat. Alien Nation”. The melodic side of the songs is a noticeable element. I here want to tip “I Believe” as most essential piece. The remixes of Ruined Conflict and ES23 both are attention grabbers.

– – – : The few softer cuts can’t really convince me. But the main element the band maybe has to reconsider is to elaborate their songs. It sometimes sounds a bit too simple-minded.

Conclusion: System Noire’s debut album is not what I would call a fully successful opus although there are a few interesting cuts that will get you dancing. I think there’s more potential in this band than what came out on this work.

Since you’re here … … we have a small favour to ask. More people are reading Side-Line Magazine than ever but advertising revenues across the media are falling fast. And unlike many news organisations, we haven’t put up a paywall – we want to keep our journalism as open as we can. So you can see why we need to ask for your help. Side-Line’s independent journalism takes a lot of time, money and hard work to produce. But we do it because we want to push the artists we like and who are equally fighting to survive. If everyone who reads our reporting, who likes it, helps fund it, our future would be much more secure. For as little as 5 US$, you can support Side-Line Magazine – and it only takes a minute. Thank you. The donations are safely powered by Paypal.
Tags: darkTunes, ES23, SynthAttack, System Noire, XmH