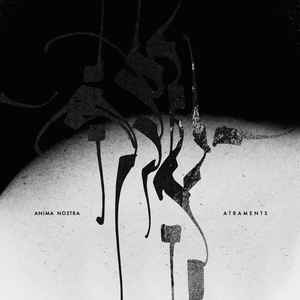 Background/Info: “Anima Nostra” was originally released as an album featuring a collaboration between Henrik Nordvarggr Björkk and Margaux Renaudin. This successful album seems to have incited both protagonists to move on under the band name Anima Nostra.

Content: “Atraments” is an invitation to travel throughout the darkest corners of extreme music. It definitely sounds into death-industrial, but there are many influences making this opus varied. I noticed a kind of transcendental ritual piece, and also short experimental cuts. Harsh drones can be heard on another track. The work sounds rough, unpolished and tormented because of the overwhelming ambient passages.

+ + + : Anima Nostra (the band) confirms the chemistry that happened on “Anima Nostra” (the album). It’s a rather diversified opus, which is carried by a solid death-industrial and totally doom-like basis while joined by ritual-, experimental-, ambient music and drones. Some of the cuts have a real transcendental appeal and I here especially refer to “Blameless”, which is a little pearl in the genre. I also want to mention “Anima Nostra” (the song) for its harshness reinforced by drones. The harsh vocal parts running through the work only accentuate the disturbing sensation this album might occur.

– – – : I noticed a few shorter cuts, which are more a kind of intermezzo instead of real achieved tracks. It also is one more new project featuring Henrik Nordvargr Björkk who must be one of the most prolific artists from the scene. It sometimes become difficult to distinguish the different projects he’s active in.

Conclusion: Death-industrial music has never been that open-minded and mixed with other influences. It remains a somewhat perverted music format, but definitely one you are going to like if you’re into this sound.

Best songs: “Blameless”, “Anima Nostra”, “Composition For The Shadow Self”.

Since you’re here … … we have a small favour to ask. More people are reading Side-Line Magazine than ever but advertising revenues across the media are falling fast. And unlike many news organisations, we haven’t put up a paywall – we want to keep our journalism as open as we can. So you can see why we need to ask for your help. Side-Line’s independent journalism takes a lot of time, money and hard work to produce. But we do it because we want to push the artists we like and who are equally fighting to survive. If everyone who reads our reporting, who likes it, helps fund it, our future would be much more secure. For as little as 5 US$, you can support Side-Line Magazine – and it only takes a minute. Thank you. The donations are safely powered by Paypal.
Tags: Anima Nostra, Nordvargr