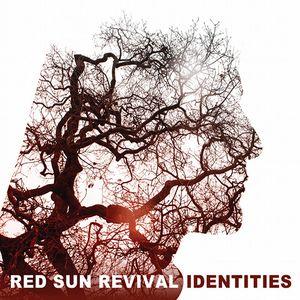 Content: After last year’s released EP “Embers” –which also was their first release by Echozone, Red Sun Revival is now back on track with a new studio album.

The London based combo reveal a new full length album featuring 10 songs. From the very first notes you’ll notice a kind of rock and new-wave element hanging over the songs. The opening cut “Premonition” although sounds a bit different, like exploring some paths of indie music. I again fully enjoy the guitar, which remains one of the main strengths of this band. The guitar parts move in between noticeable goth/wave play and more moody parts, which can also become a little less evasive. There’s an interesting switch in the tracklist, which makes “Identities” accessible for a wider audience.

Songs like “Echoes” and “Four Walls” both are cool ambassadors for the more evasive side of the work. This side of Red Sun Revival also becomes more explicit and into a real cinematographic style on “The Reckoning”. There’s a kind of elevating element emerging from the production, and especially from the guitar playing.

Another main element featured on this album is the real artistic touch emerging from the violin. It’s not exactly adding a neo-classic touch, but mainly some grace to the final production. That’s also what you’ll maybe feel on “In Your Name”, which has been polished by delicious piano-like parts.

If you already heard the previously released EP “Embers” you’ll for sure recognize the song “Mistakes”, which has been featured as an ‘album’-mix.

A last song I want to mention is “The Condemned” and especially the 1st part for its cool psychedelic touch. This was already an aspect of Red Sun Revival I discovered on their aforementioned EP.

Conclusion: Globally speaking I like the diversity of this work while the sound fascinates me for the great guitar playing.

Best songs: “In Your Name”, “Four Walls”, “The reckoning”, “The Condemned PartI”.