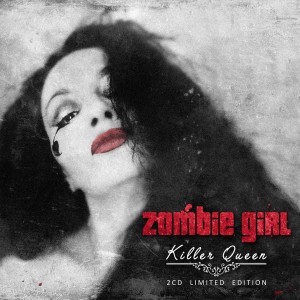 The album was produced & engineered by none other than the team consisting of Kurt Maas & Dave Rave Ogilvie, mastering was done by Lawrie Bayldon from Studio-X fame. You can again expect fat beats, dirty female vocals and also 2 covers, Berlin’s “Pleasure Victim” and The Cure’s “Fascination Street” (which also appeared on the The Cure tribute compilation “A Strange Play”).

The album is also available in a deluxe 2CD carton box edition with a bonus disc including an exclusive collaboration with Helalyn Flowers (and guest backing vocals by n0emi) and other remix work by artists in the like of Psy’aviah, Acylum, Simon Carter, Venal Flesh, Llumen, Pax Sono, Avarice In Audio, Eexxee, Cardinal Noire, Black Nail Cabaret, Shades:Of:Hell, Complex Mind, Diffuzion and so on.

And there’s more, in a mail to its clients Alfa Matrix offers a coupon code to get 25% discount on the complete Zombie Girl back catalogue in the label’s CD/DVD webstore at www.alfa-matrix-store.com . The coupon code is 41654, just insert it when checking out and you’ll get 25% reduction on the Zombie Girl back catalogue material, both normal and 2CD sets. The offer is only valid until the release date of the album, that is October 31st, so make sure to use it before that!

For those who prefer the digital download, use the discount code september5236584 to get 25% off the normal price on Alfa Matrix’ Bandcamp page. The code can be used on as many items as you want and expires at the end of September.