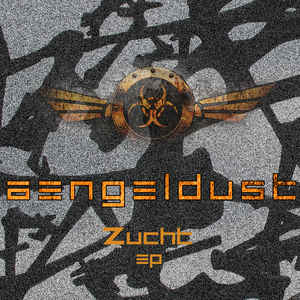 Content: The sound and influences haven’t changed at all. Aengeldust sounds harder than any other project Nadine is involved with. This is the industrial side of the Aengeldust ‘bitch’ and I can assure you it’s a new merciless assault.

+ + + : Among the new cuts I especially like both opening tracks, which are mixing the dark-electro style of Wumpscut (definitely an important source of inspiration for the Acylum-gang) and pure harsh industrial music. The remixes (of songs that were originally released on the “Agent Orange”-album) are adding diversity, but can’t compete with the harshness of Aengeldust. I however like the work of Havokk for its bombast and Endzeit for the distorted power.

– – – : I expected a bit more out of Acylum, Siva Sixx and Siamgda. They’re for sure the most familiar names from the list although not delivering the most inspired cuts.

Conclusion: “Zucht” clearly is the EP that would have been originally released as extra disc on the limited edition of the album, but as the label seems to have changed its policy about limited editions we here get a nice and highly recommended EP confirming the industrial rage of Aengeldust.

Since you’re here … … we have a small favour to ask. More people are reading Side-Line Magazine than ever but advertising revenues across the media are falling fast. And unlike many news organisations, we haven’t put up a paywall – we want to keep our journalism as open as we can. So you can see why we need to ask for your help. Side-Line’s independent journalism takes a lot of time, money and hard work to produce. But we do it because we want to push the artists we like and who are equally fighting to survive. If everyone who reads our reporting, who likes it, helps fund it, our future would be much more secure. For as little as 5 US$, you can support Side-Line Magazine – and it only takes a minute. Thank you. The donations are safely powered by Paypal.
Tags: Acylum, Aengeldust, Antibiosis, Endzeit, Siamgda, Wumpscut