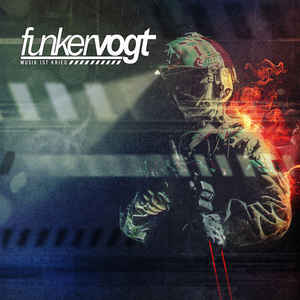 Background/Info: 2017 has been an important year for electro-veterans of Funker Vogt. After a long period of commotion the band finally struck back with a new album featuring a new singer (cf. Chris L from Agonoize, Sexorcist). This EP moves back to the album “Code Of Conduct” featuring multiple remixes, and also reveals 3 brand-new songs.

Content: The EP takes off with a “Video Version” of “Wahre Helden”. This song was not exactly my favorite cut from their new album, which in a way symbolizes a new start for the band. It however features the sonic trademark of Funker Vogt characterized by a powerful kick, dark synth lines and bleeping sequences. Among the new cuts I noticed real cool songs, which remain in the typical vein of the band, but with more persuasive vocal parts.

You next get 2 remixes of “Gladiator” and 2 of “Für Immer” and 2 more of  “Tanzbefehl”. Funker Vogt remixed a few songs themselves, but it also is an opportunity to hear the work of Agonoize, Cephalgy and Novakill.

+ + + : This is an interesting EP as it delivers 3 new cuts. And I can assure you “Strike Force” and especially “Bloodbrother” both are great and powerful cuts in the traditional enraged format of the band. I like the rage emerging at the surface while “Bloodbrother” also reveals a great lead.

I’m not a huge fan of remixes, but here again I discovered a few brilliant remixes and I especially have to mention a great contribution from Agonoize and Kunstwerk.

– – – : I unfortunately also discovered a few remixes, which don’t bring any bonus to the EP. I can imagine making an ‘orchestral’ version might be fun, but it’s not exactly a successful result.

Conclusion: Funker Vogt is definitely back on track and the new line-up, still conducted by the genius of Gerrit Thomas, is getting better and better.

Since you’re here … … we have a small favour to ask. More people are reading Side-Line Magazine than ever but advertising revenues across the media are falling fast. And unlike many news organisations, we haven’t put up a paywall – we want to keep our journalism as open as we can. So you can see why we need to ask for your help. Side-Line’s independent journalism takes a lot of time, money and hard work to produce. But we do it because we want to push the artists we like and who are equally fighting to survive. If everyone who reads our reporting, who likes it, helps fund it, our future would be much more secure. For as little as 5 US$, you can support Side-Line Magazine – and it only takes a minute. Thank you. The donations are safely powered by Paypal.
Tags: Agonoize, Cephalgy, Funker Vogt