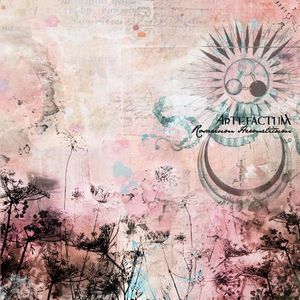 Content: Artefactum is a Polish project set up by Merissa d’Erlette. I personally remember the “Chaos elements”-album released by Athanor now 10 years ago which revealed an interesting and anguishing ambient-minded music.

The year after this release Artefactum released “Rosarium Hermeticum” (2006) while a few more productions were released later on. Ur Muzik (which is a small label, but interesting label devoted to dark-ambient music and run by Merissa d’Erlette) now re-released this opus while adding 2 bonus tracks. The album is an interesting way to rediscover the enigmatic and obscure sound fields of Artefactum. The compositions are made of obscure sound collages and field recordings-like elements like aquatic sounds and wind bells. The work sounds pretty soundtrack-like and rapidly starts to awake your darkest fantasies. You progressively feel like you are embarking on a trip through the endless corridors of despair where spoken words will occasionally become your guide throughout this sound inferno.

“Rosarium Hermeticum” is inspired by esotericism and masterly transposed into music. The sound will lead you towards the imaginary gates of hell. Cold sound blasts and iron sounds accompanied by ghost-like vocals create a kind of horror vision while some kind of lost Gregorian chants can be noticed as well. This freaky sound experience has a little ritual touch as well.

The album features all six original tracks plus two new cuts. I here especially want to recommend the last cut “Southern Skies” featuring spoken guest vocals by Grzegorz Siedlecki (Horologium) while female chants are once more accentuating the mysterious touch of the work.

Notice by the way that the original self-release already was strictly limited and it’s not that different for this new edition.