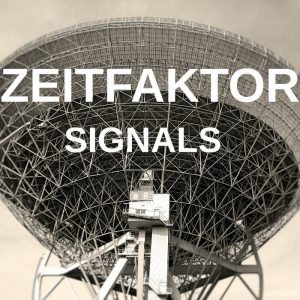 Background/Info: Zeitfaktor is a German solo-project. Daniel’s classical music education incited him to compose his own music, which has been mainly inspired by 80s and 90s electronic music plus neo-classic- and experimental electronics. This first full length album is an opportunity to get a bit more familiar with this band.

Content: After an intro-cut Zeitfaktor took me by surprise unleashing a vintage-like minimal-electro/EBM driven cut with half spoken vocals. This is a great piece of music, which is not representative for the rest of the work. “Signals” is featuring mainly instrumental songs, which are pretty cinematographic-like.

Several songs have been accomplished without any rhythmic. You’ll hear piano arrangements and numerous string parts. The composition is pretty vintage-like and moving from some reverie passages into a pure horror soundtrack approach.

One of the most noticeable cuts (cf. “Silence”) is featuring guest vocals by Mari Kattman. The song remains inspired by pure cinematographic compositions.

+ + + : You can easily perceive the classical music education from the artist. The arrangements are well-crafted and often subtle. It resulted in numerous beautiful songs (and I especially want to tip “Movement”), which will especially appeal for lovers of soundtrack compositions. The songs have been composed with a great retro-sound approach, which mainly comes through in the overwhelming strings. One of the first cuts (cf. “Escape”) is something totally different, but still the most efficient cut of the album. This is an intelligent, well-crafted piece of minimal EBM.

– – – : There’s a serious hiatus between the “Escape”-song and the rest of the album. When I heard “Escape” I really thought to discover a brilliant and creative opus. The cinematographic approach is well-crafted as well, but I’m afraid it will only catch the attention of a very restricted number of music lovers. A bit more vocals could make the work a bit more accessible.

Conclusion: If you like well-crafted soundtrack music “Signals” definitely is an album that will catch your attention. I’m however convinced this artist has much more writing skills, which unfortunately didn’t really come through here!

Since you’re here … … we have a small favour to ask. More people are reading Side-Line Magazine than ever but advertising revenues across the media are falling fast. And unlike many news organisations, we haven’t put up a paywall – we want to keep our journalism as open as we can. So you can see why we need to ask for your help. Side-Line’s independent journalism takes a lot of time, money and hard work to produce. But we do it because we want to push the artists we like and who are equally fighting to survive. If everyone who reads our reporting, who likes it, helps fund it, our future would be much more secure. For as little as 5 US$, you can support Side-Line Magazine – and it only takes a minute. Thank you. The donations are safely powered by Paypal.
Tags: Zeitfaktor