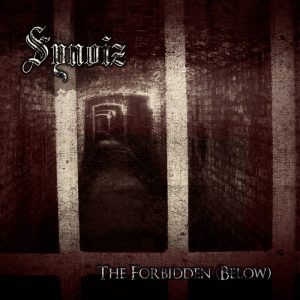 Background/Info: Synoiz is a solo-project driven by Graeme Donaldson. The artists hailing from Newcastle Upon Tyne (England) strikes back after a hiatus of 4-5 years.

Content: The main sources of inspiration remain dark-ambient minded. Donaldson invites the visitors to enter a horror sound-universe. Endless sonic corridors filled with vibrating sound waves and obscure atmospheres have been merged with multiple field recordings and fragmented or whispering voices and chants.

“The Forbidden” is an appropriated title for this anguishing sound trip, which during the entire voyage remains cold and tormented.

+ + + : “The Forbidden” brings most essential elements of any great dark-ambient release together. The composition has a solid visual appeal, which is reaching its climax at “The Forbidden (Below)” where mysterious background chants are accentuating the production of adrenaline. The icy and disturbing atmospheres reinforce this freaky sensation while I also like the progression of the tracklist, which takes off a rather ‘innocent’ way and slowly moves towards poignant pieces.

– – – : “The Forbidden” features 10 tracks. The first ones can’t really convince me, but quite progressively I started to really enjoy this album. I would have preferred a few less cuts and even more elaborate the others.

Conclusion: The titles of the tracks clearly indicate you’re entering an anguishing area. Synoiz is an imaginary antechamber of horror.

Best songs: “The Forbidden (Below)”, “Exsanguinate”, “Some Inhuman remains”.