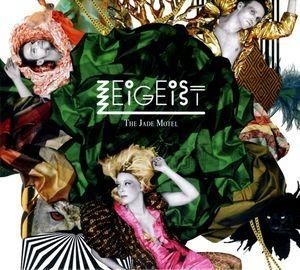 Content: The album “The Jade Motel” will appeal to all lovers of synth-pop music although die-hard fans in the genre already know this opus, which was originally released in 2008 by the Swedish label Spegel.

Zeigeist was created in 2006 and split up in 2009. ‘They started as a collective of several artists, musicians and designers and created the art’ntainment concept. Electro-Shock Records brings us back in time, but I think it’s a great opportunity to discover an excellent album, which was lost in the endless corridors of time.

“The Jade Motel” reflects a pure vintage electro style, clearly evoking some legendary projects from the 80s. The sound formula appears a bit like an emulation of 80s productions, but you don’t hear me complaining. The songs are well-crafted while revealing the sensual timbre of voice of Princess. The male backing vocals are quite essential as well, both singers together becoming fully complementary. The male vocals running through “Cuffs” are pretty hot as well. It for sure appears to be one of the main strengths running through “The Jade Motel”.

This album is an easy listening experience revealing a few outstanding cuts. The previously released digital single “Wrecked Metal” is a great old-school orientated song revealing impressive sequences. “Tar Heart” is another essential track while “Bunny” (previously released as a digital single) appears to be one of the most dance-minded cuts. I also have to mention “Fight With Shattered Mirrors”, which sounds pretty simply, but very cool. I like the tune running through this song featuring delicious 80s reminiscences while there again is a perfect balance between female- and male vocals.

Conclusion: This album is an opportunity for all of those who never heard of this band before to discover a cool and typical synth-pop album.