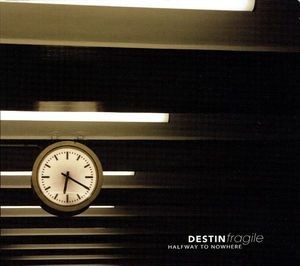 Content: Destin Fragile is a Swedish synth-pop band that will take you by surprise. It’s not necessarily about the music, but the band members. We already knew Pontus Stålberg and Stefan Nilsson both as masters of EBM. Spetsnaz for sure is one of the greatest EBM acts of the past several years. But I guess only a few number of people knew that they both also were involved into a synth-pop band called Destin Fragile.

This band was set up during the 90s, but except for some demo tracks, compilation contributions and a few live shows nothing really happened. Destin Fragile has been recovered from dust and joined by Daniel Malmlöf (who you maybe know from Octoberland and which also featured Stålberg).

It took them 2 years to accomplish this official debut album revealing 10 cool songs in the purest synth-pop tradition and with a strong Swedish taste. Destin Fragile appears to be influenced by Depeche Mode while a band like De/Vision also comes in mind, but the sound also reminds me of typical Swedish synth-pop projects and I here especially think of Elegant Machinery. A few other (harder) cuts come closer to body-pop evoking good-old memories of And One. You might think it’s not that original and definitely not innovating. That’s true and it already was one of the main elements of the Spetsnaz sound, but on the other side those artists already confirmed their great knowledge and artistic genius to compose brilliant songs carried by an impressive production.

Some EBM elements are especially coming through in the dry, powerful bass lines, which you’ll notice on “Run Away” and especially on “April Light”. The last mentioned song also appears to be one of the potential hits. But globally speaking the rest of the work is quieter and entirely devoted to pure synth-pop music. It works fine on songs like “In Your Eyes”, the somewhat colder “In The Frame”, the De/Vision-like “Change” and “In Plain Sight” which might evoke Elegant Machinery souvenirs.

There also is a really surprising hidden track (cf. “The End”), which takes off by the famous classic work of “Carmen” by Bizet. It’s a somewhat weird, but original adaptation/transformation of this composition into pop music. This song of course is not entirely representative and not one of my favorites, but it simply illustrates the diversity of the work. I also have to say a word about the vocals by Pontus Stålberg who appears to be a man of many talents. He clearly can sing a pure and captivating pop way. Notice by the way that the songs have been sung in English.

Conclusion: After the merciless EBM power of Spetsnaz we now get the porcelain made synth-pop of Destin Fragile. “Halfway To Nowhere” is a work to discover!