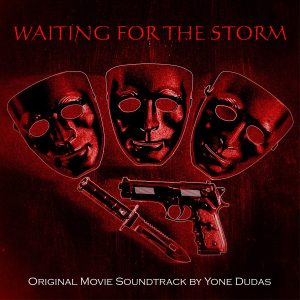 Background/Info: We all know Yone Dudas as the female pole of Decoded Feedback. This album is something different from her involvement with the established dark-electro band and is a soundtrack she realized for Rogelio Salinas’ movie “Waiting For The Storm”.

Content: This album has less in common with Decoded Feedback although you’ll recognize the beautiful synth layers hanging over the compositions. Yone Dudas clearly has a nose for soundtrack music. She accomplished a poignant and sometimes a bit freaky like composition, which remains carried by electronic treatments, space-like tones, buzzing and vibrating sound waves and a piano-like tune, which comes back at regular basis.

+ + + : I noticed some great and menacing bass lines mixed with cool sequences. The bass lines are really marvelous and even better what I ever heard on Decoded Feedback. I’m especially referring to the song “Bloodfields”, which is a little jewel in the genre. The kind of piano tune sounds a bit like the clue running through this work, creating a particular and mysterious sphere.

– – – : A soundtrack always is a part of a wider artistic creation and you often have to see all elements together to get a real idea about the impact of the music on the movie. I didn’t see the movie so it’s not that easy to get a precise point of view.

Conclusion: Composing a soundtrack often is a dream and an intimate experience for most of the musicians. Yone Dudas fully succeeded in her goal and it makes me curious to discover the movie.