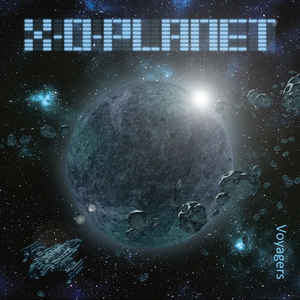 Background/Info: One year after their debut album “Passengers” Goderic Northstar and Manja Kaletka return with a new full length inspired by their fetish sci-fi theme. “Voyagers” has been already got very positive reactions in their homeland Germany.

Content: I wasn’t a huge fan of the debut work although “Passengers” revealed interesting ideas. The electro-pop style on this work became a bit more ‘conventional’ ands definitely more worked out. The songs reflect a growing maturity of the band, which is noticeable through carrying choruses, wafting string parts and some retro-like elements. Manja Kaletka also has a particular way of singing, which is what sterile-like and here again like a wink to 80s productions.

+ + + : The production of the vocals remain one of the band’s main strengths. I like the way this girl is singing, mixing a sterile way of singing together with a flavor of sensuality. Sound-wise X-O-Planet has gained in maturity, seriously improving the writing process and the global production. The album also became a bit more danceable than its predecessor.

– – – : Maybe it’s because I’m not German, but I don’t share a similar enthusiasm for “Voyagers” as in the band’s homeland. I’m missing some little elements and especially in the chorus parts. There’s a serious improvement in most aspects of writing and production, but I can’t affirm to have heard a real potential hit instead of multiple cool and enjoyable cuts.

Conclusion: “Voyagers” sounds sweet as electro-pop can be; it’s an easy and entertaining listening, but without real surprising elements.