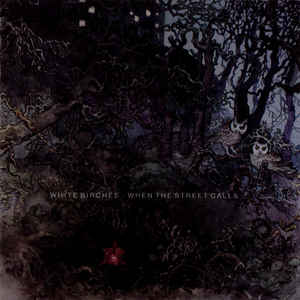 Background/Info: Set up in 2013 by the Swedish duo Fredrik Jonasson (synths, drum machines, samplers) – Jenny Gabrielsson Mare (vocals, guitars, piano) White Birches so far self-released the debut album “Dark Waters” (2015) and one EP. They got some positive feedback in their homeland and joined hands together with Progress Productions to unleash their second full length.

Content: The sound is clearly inspired by electro-pop music, but accomplished with numerous and sometimes atypical influences. Some tracks have been achieved with bombastic arrangements while other passages reveal a more evasive atmosphere. I also noticed a more shoegaze-inspired cut. The album is constantly moving from one influence till another and that’s maybe due to the impressive amount of guest musicians and backing vocalist who contributed to the work.

+ + + : “When The Street Calls” is a diversified piece of music, which is hard to label as any particular genre. It’s quite easy to call it ‘pop’, but I like the atypical format of the composition. This is not the typical Swedish electro-pop act emulating Depeche Mode. This album sounds darker and definitely more personal. The songs are supported by dark atmospheres while Jenny’s angelic vocals reflect passion and are sometimes –like on the title song, even a bit bewitching. This album appears to be a truly experiment with pop standards resulting in several poignant songs.

– – – : The main strength of the album probably also is its main challenge. White Birches don’t really belong to an established music genre and rather sounds as fusion between different influences. That’s why this band is unusual and their album a challenge.

Conclusion: “When The Street Calls” is an open-minded album revealing a band striving for a personal sound creation. I can understand the enthusiasm they got in their homeland although I’m sure they still have more potential than what came through on this opus.