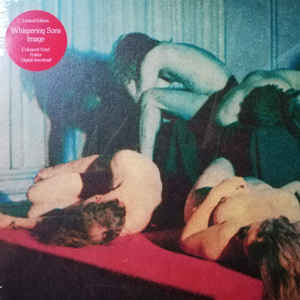 Background/Info: The Brussels based Whispering Sons were set up in 2013 and became one of Belgian hottest newcomers from the past few years. They won a very famous national contest, released two singles (on Weyrd Son Records and one EP (on Wool-E-Tapes), became a successful live band (in Belgium, but also abroad) and now signed to the German Smile Records to unleash their debut album. The album has been released in the USA on Cleopatra.

Content: “Image” features 10 songs, which from start on clearly evoke some of the darkest bands from the 80s cold-wave movement. The typical, mewing guitar parts are sometimes evoking The Sisters Of Mercy while the low, resonating bass play definitely sounds as cold as death. The songs have been progressively built up and nearly always reaching a total apotheosis. Some cuts have something trance-like; a bit comparable to the sensation of elevation. On top of it all you’ll hear the dark and growling timbre of voice of their female singer Fenne Kuppens.

+ + + : Whispering Sons confirm on their debut album all their potential. This band is probably one of the darkest ones I’ve heard in years. It clearly sounds inspired by the most obscure and chilling cold-wave music from the 80s, but they still have something very personal. The guitar parts are simply genius. There’s a kind of power emerging from the guitar playing, which becomes magic. It has a real impact on the listener and that’s probably why I sometimes experience it as ‘trance’-like. But be careful because this album also has something suicidal. The ultra dark atmosphere hanging over the music is not exactly the kind of thing that will get you happy… Well, that’s just what I like to hear when listening to this kind of music and that’s what reminds me of The Sisters Of Mercy, Joy Division, Bauhaus and co. Last, but not least, Whispering Sons didn’t spare any effort to release a real opus magnum, recording their work in a professional studio while assisted by real professionals (like the mix done by Bert Libeert from Goose).

– – – : I don’t have any single minus point about the songs properly speaking, but there’s just one little intriguing point about this work. Despite of the professional recording and crew I get the impression the global mix could have been better. It can be something intentional to recreate the original sound of the 80s.

Conclusion: Whispering Sons confirm on “Image” their talent and this band could simply become one of the new leaders in their music genre. “Image” definitely is a major release from 2018!