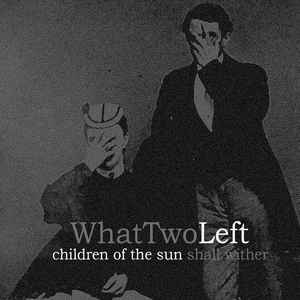 Background/Info: American duo WhatTwoLeft has already released a number of productions. They’ve joined hands with Brazilian leading label Wave Records to release this album featuring two previously released productions in one. It will be an opportunity for numerous music lovers to discover this ‘new’ formation.

Content: Evasive guitar playing and synthesizer parts plus male- and female vocals are the main elements used by WhatTwoLeft. The music remains pretty minimal-like, sometimes a bit moving into cinematographic experiments. You now and then also can hear the shadow of Joy Division hanging over this work while there also is a cover version of New Order (cf. “Leave Me Alone”).

+ + + : WhatTwoLeft can be now and then linked to some 80s legends of new-wave and cold-wave music, but it only consists of some elements running in a song. And one of these cuts (cf. “Tigerweb”) also is one of the best cuts from this opus. Another noticeable cut is the somewhat film-minded “Dusk Lifts Its Skirt” featuring evasive and angelic female vocals.

– – – : The album sounds a bit minimal-like, but to me it mainly appears to be unaccomplished. The songs are missing elaboration while none of the tracks feature a real climax. Most of the aspects from this production have to be reconsidered and improved.

Conclusion: Wave Records is a label I deeply respect and which makes me discover interesting bands at regular basis, but this album is a total disappointment! This band can only do better on their next work.

Since you’re here … … we have a small favour to ask. More people are reading Side-Line Magazine than ever but advertising revenues across the media are falling fast. And unlike many news organisations, we haven’t put up a paywall – we want to keep our journalism as open as we can. So you can see why we need to ask for your help. Side-Line’s independent journalism takes a lot of time, money and hard work to produce. But we do it because we want to push the artists we like and who are equally fighting to survive. If everyone who reads our reporting, who likes it, helps fund it, our future would be much more secure. For as little as 5 US$, you can support Side-Line Magazine – and it only takes a minute. Thank you. The donations are safely powered by Paypal.
Tags: WhatTwoLeft