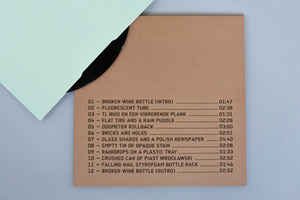 Background/Info: Werner Urban is an artist hailing from The Netherlands. He already released several productions in between 2007 and 2011, but this work is a kind of comeback. “Dworzec Towarowy” is a conceptual work, which was recorded in an abandoned station in Poland where Werner Urban recorded multiple field recordings he later on reworked and transformed in his studio.

Content: I expected a truly and total experimental work, a bit in the good-old spirit of Staalplaat releases. The result is definitely experimental, but easily accessible. The tracks mix easily recognizable field recordings, spoken voices, electronics and industrial sound treatments. Werner Urban also used some slow rhythms to get it more accessible.

+ + + : This is one of the only artists I’ve heard in years who’s able to mix very experimental and even extreme field recordings together with danceable and sometimes groovy electronics. The work has a visionary approach and definitely makes experimental music accessible for a wider audience of electronic lovers. I like the groovy loops running throughout a few cuts. Werner Urban is a creative artist or should I say a real sound alchemist who has found the procedure transforming rough noises into accessible and exciting electronics.

– – – : In the end it all remains experimental and sometimes a bit improvised. That’s for sure the main difference with ‘usual’ electronic standards and probably hard to endure for ‘classic’ electro lovers.

Conclusion: The main aim of this album was to bring the abandoned place where this album found its inspiration back to life. The least I can say is that “Dworzec Towarowy” became an original and creative process reflecting intelligence and efficiency!

Best songs: “Crushed Can Of Piast Wroclawski”, “Bricks And Holes”, “Glass Shards And A Polish Newspaper”.