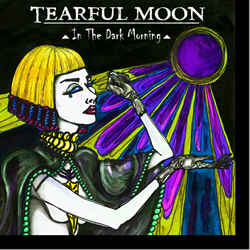 Background/Info: Tearful Moon is an American formation featuring two lovers. It’s the fusion between a female poet (and a muse) and a male musician. They got the idea to put poems on music, which ultimately resulted in this debut album.

Content: Tearful Moon deals with a kind of dark electro-wave music. The sound formula is rather simple and into minimalism. The songs are supported by atmospheric sound layers creating a perfect match with the bewitching vocals of Sky Lesco.

The songs clearly sound a bit retro-like. There’s some sensuality emerging at the surface, which even moves towards some ritual-like passages. The lyrical content clearly is an important and even essential aspect of this work. The themes are dealing about love, despair and are definitely into drama and melancholia.

+ + + : Tearful Moon awakens some good-old souvenirs bringing me back the 80s electro-wave decade. The synth lines and rather sterile way of singing are noticeable aspects of the work. The minimal electronics are simplistic, but efficient. “In The Dark Morning” is a fully entertaining piece of music featuring a few cool songs.

– – – : Don’t get me wrong, I really enjoy this work, but I’m missing a bit more elaboration in the global production. The sound formula is simple and efficient, but a bit repetitive and predictable after a while. I expected a bit more from the lyrical content, which is not exactly setting the world, alight.

Conclusion: Tearful Moon is a cool newcomer and definitely a band to keep an eye on. This is a promising debut and the band simply needs a bit more experience to reach a wider audience.