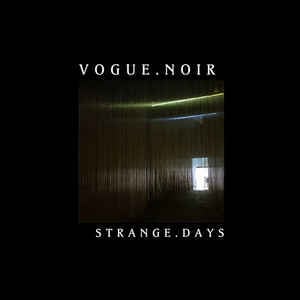 Background/Info: Two years ago now I discovered the self-titled debut-EP from London based Vogue.Noir. Driven by Dominique Cologne (aka Alex Kelvin, previously involved with Sato Sato) “Strange Days” has been released earlier this year.

Content: The main influences of Vogue.Noir haven’t really changed and getting us back to some retro-like electro-wave music. The somewhat ghost-like vocals accentuate a feeling of coldness hanging over the work. There’s a dreamy kind of melancholia running through the songs and, which is especially accentuated on the instrumental “Interlude”.

+ + + : Vogue.Noir deals with great synth music, which is characterized by this typical vintage touch bringing us back somewhere in the 80s. It has something evasive, but still cold and sterile-like. The melancholic flavor on top of the songs is only accentuating this feeling. The album features a few great songs, but I’ll especially tip the last song of the album “Crush”. I also noticed some improvement in the global production from the EP towards this album.

– – – : The album is missing an absolute hit, but the only regret is maybe that some of the songs are pretty similar. In the long run it starts to become a little bit predictable.

Conclusion: Vogue.Noir confirms the potential that was revealed at the debut-EP. This album brings the true 80s spirit alive and it’s maybe somewhat contradictory to say, but it sounds refreshing.