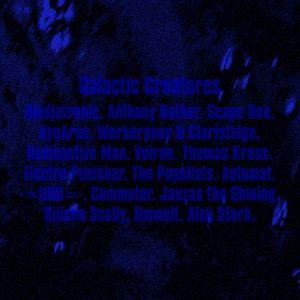 Content: This digital sampler featuring 19 songs is a pure lust for lovers of minimal electronics spaced with some technoid elements. We’ve commonly call it ‘electro-clash’, but that was a description used some years ago now. One of the leaders in the genre without a shadow of a doubt was French sound wizard David Carretta. He’s also running Space Factory on which this sampler has been released.

The tracklist reveals real famous and established artists in the genre, but it also is an opportunity to discover a few less familiar names like Thomas Kress, Electro Punisher and few more. The common element between all artists is the good-old vintage electro style mixing early elements of EBM and contemporary ingredients of techno music. The result leads to minimal electronic productions mainly carried by the passion to create unique sound treatments. There’s a lot to experience on “Galactic Creatures”, but there are always a few artists that emerge from the masses.

The song “Electornic Isolator” by Thomas Kress definitely is one of the best surprises and outstanding cuts. This song reveals impressive sound treatments, which are reminding me of Kraftwerk, and also to The Hacker. “The Night Shift” by Uhu is another outstanding cut, which is mainly carried by a brilliant, icy sequence.

The album features several French artists and Voiron is one of them. “Laboratoire Voiron” sounds pretty space-like, but is another intelligent exposure of ‘modern electro-clash’ music.

I already mentioned Kraftwerk, which remains one of the greatest artists in history of electronic music. Silicon Scally sounds pretty underground-like, but I here again eventaully noticed a link to the work of Kraftwerk.

Among the other tracks and artists to keep in mind I would mention Electro Punisher for its minimalism, which also remains a trademark of Automat. Dynarec and Radioactive Man both are other artists revealing great sounds as well.

Conclusion: This album is a must have for vintage electro lovers and other electro-clash freaks. This is intelligent electronic music embellished by a delicious flavor of the 80s.