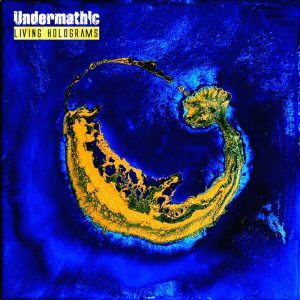 Background/Info: Polish artist Maciej Paszkiewicz got some recognition by his four albums released on the now defunct Tympanik Audio label. This new self-released work has been released more than 4 years after the last album “Indistinct Face”.

Content: I’m not saying that Undermathic has reinvented its sound, but it all became more diversified. It feels a bit like a natural osmosis between IDM, experimental music and downtempo or laidback sonorities. Sometimes a bit dubby-like and then reminding me to the sonic manipulations of early Daft Punk, the sound is characterized by raw sound treatments. This album will make you dance, but still dream away through a few more cinematographic passages.

+ + + : “Living Holograms” is a refreshing production and according to me the most sophisticated and eclectic work from this artist. The downtempo cuts are pretty sexy while the dubby touch created by the vibrating bass lines only accentuates this feeling. But Undermathic also distinguish themselves with fascinating sound treatments. I especially like the raw, synthetic sound treatments this work has been made of. “Repeating” is one of the most noticeable cuts to illustrate the writing and production skills of Maciej Paszkiewicz.

– – – : I don’t have real minus points, but only one cut (cf. “All Around Us”) couldn’t convince me. That’s not so bad when you realize this album features 13 tracks!

Conclusion: Undermathic is in search of a new label so this album can only, but convincing a label with taste for accomplished and intelligent productions. This is pure high-tech music, which reminds me to the great roster of Tympanik Audio, which remains one of the labels I’m really missing.