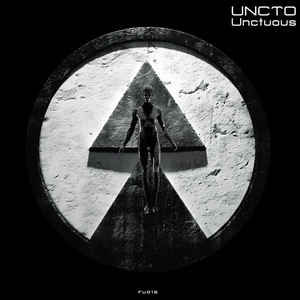 Background/Info: Hailing from Upper Silesia and operating from Berlin, Dominik Müller (still owner of Funarum Records) and Rafal Fürst are back on track unleashing a new 12” featuring 4 songs.

Content: This is one more project mixing techno together with darker music styles such as industrial. “Unctuous” brings different music genres together, but clearly reinforce the growing legion of dark-techno artists. Especially the title track and “Cold Knife” are more into this sound direction. There also is something tribal-like running through “Cold Knife”.

+ + + : Uncto has something visionary, but you also can say it’s just a fusion between music genres. The sound has something underground-like and that’s what I like at this 12”. “Unctuous” brings different and somewhat opposite music genres together, which resulted in a noticeable cuts.

– – – : Four cuts is a nice thing for an EP, but unfortunately there also is a more uninspired part such as “Trust No One”, which is more techno-driven, but less accomplished.

Conclusion: “Unctuous” has something schizophrenic, bring techno- and industrial music together, but in the end it’s a sonic schizophrenia I can only, but fully support… even if I already heard more convincing releases in this genre.