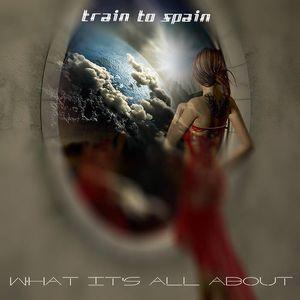 Content: The self-released EP “The Perfect Match” was a rather promising beginning for the Swedish duo Train To Spain. They now joined Sub Culture Records on, which they already released the digital EP “Keep On Running”.

The debut album “What It’s All About” features 11 songs. Six tracks were taken from “The Perfect Match” while we also get 5 new songs. Train To Spain finds their influences in the magic of the 80s electronic music. The band name was directly taken from a Human League song. That’s also an indication about inspiring bands. The typical vintage touch throughout the songs makes the essence of this album.

There’s nothing really innovative, but you can feel a real passion for electronic music. It comes through in the well-crafted and carrying melody lines and the global catchy aspect of the songs. The majority of the bass lines are quite alluring and that typical again for the 80s electro-pop formula. But the sound also reveals a modern approach by some cool filtered sound treatments. One of the new tracks (cf. “Pressure”) is a very efficient cut in the genre.

But the most promising tracks are two other new cuts. “Remind Myself” is somewhat evasive, but still driven by familiar pop vibes. “Martin David And Fletch” is the other attention grabber. It’s a great and danceable electro-wave composition featuring the fragile and sterile vocals of Helena Wigeborn. The song and the vocals remind me a bit of Sara Noxx.

Among the ‘familiar’ songs I can highly recommend the opening piece “Blipblop” (which was released as the title song of a digital EP by Juggernaut Music as well) for its global elaboration and the sweet female vocals. “Screw It Up” remains another attention grabber. It’s a fully danceable, but well-crafted piece of pop. A last song I want to mention is “Passion” for the more into ‘made in Sweden’ label reminding me of a band like Spock.

Conclusion: Train To Spain hasn’t missed with their debut album and reveals one more talented formation from Sweden.