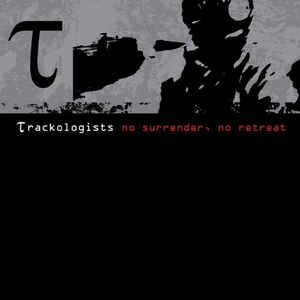 Content: “No Surrender, No Retreat” sounds like a determinant title symbolizing a great sound production. The influences are clearly into IDM while there also is an impressive arsenal of industrial sounds that has been used. It injects a hard and unpolished touch to the work. But it also creates a modern IDM interpretation, which is carried by low, broken rhythms. Some passages are even into a surprising sensual format, which is accentuated by intriguing Eastern-like sounds (cf. “Bayt Al-Hikma”).

Another and essential surprising element is the vocals running through this album. You don’t really expect vocals when listening to UIDM and/or industrial, but Trackologists incorporated meaningful vocal parts to the composition. Most of the vocals have been produced like a sampling effect, which totally fits with the modernism of the sound. The lyrics reveal a rather abstract content, which seems like a self-reflection and a critical view upon society and life generally speaking.

+ + + : Trackologists is much more than simply a project between two bands. This work reveals an impressive sound creation and a sophisticated IDM exposure characterized by raw sound treatments and intelligent industrial sound elements. This is a brilliant electronic composition revealing multiple exceptional songs.

– – – : I don’t see real minus points although the remixes of both bands don’t really add a bonus and are the less convincing cuts.

Conclusion: Trackologists is a successful fusion between two established and recognized names from the German industrial scene. This work is an intelligent exposure of their creative brains.