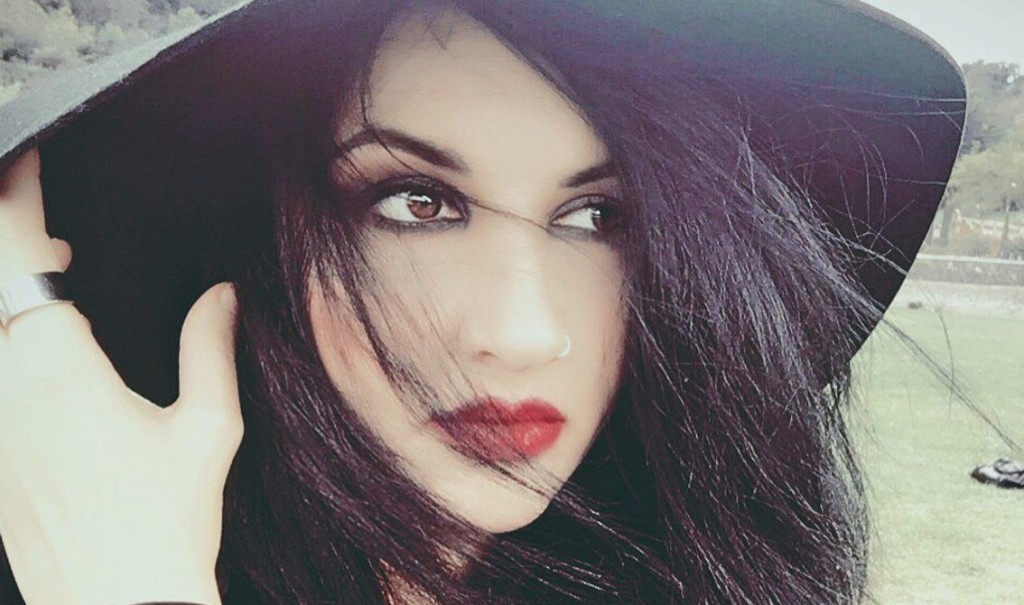 Over the past few months we have noticed quite a lot of releases that featured artwork by the Italian artist Noemi Aurora under the Toxic Visions umbrella, who many will also know as frontwoman of the electro goth metal act Helalyn Flowers. The Psychic Force, Elyose, The Wet, BlackCore, Sin.Sin, these are just a few bands who have teamed up with this young graphic artist (check her official website).

We hailed Italy for an interview.

SL: When did you decide to found your factory Toxic Visions? What did push you to express a part of yourself into art?

N: The art project Toxic Visions borns from the need to express dissociative moods, emotions and feelings by combining different forms of visual arts and photography. I’ve always been into creative arts since my childhood. I started as a dancer, when I was about 6 years old, and I used to design a lot.;I first approached design through analogue means like black and white drawing, acrylic painting and mixed media. 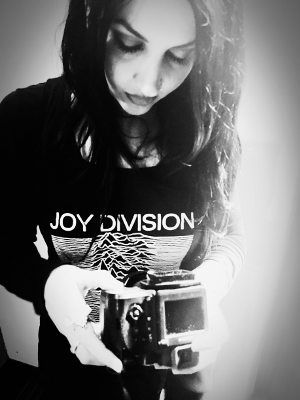 Originally, it was more a therapy, a way to self-expression rather than commercial purpose or for publicity. As time passed by, I felt I had to unite my passion for both music and art, so I embarked on my career of band designer and visual merchandiser, with a special focus on band photography. What led me to focus on my work as a band designer is the conceptual relationship of the visual arts with the music. I conceive Toxic Visions as a double-sided project. You can figure it as a moon of arts, where one side is completely obscured and unknown to the world. It’s made of artworks, pics and paintings I create only for myself, driven by a very intimate mental situation. These works are kept apart, hidden, and I never use to watch them. Then there’s the public side, which includes my commissioned works, fine art, artworks for sale, photography and all the works you can see published.

SL: What’s ‘toxic’ in your visions? Do you see yourself like a visionary?

N: The name Toxic Visions was born back in 1999, during my years at the high school of arts and is inspired by my own way to conceive my subjects. May it be painting, digital artwork or photography, they are visions inspired by the intoxicating life, fragments of experiences and emotions that appear before my eyes like flashes. I even define my inner self ‘toxic’, as the contamination between the abstract idea and the physical realisation of my visions.

SL: What about Noemi – the persona?

N: I’ve always been a silent girl, thoughtful and a careful observer of the surrounding world, though my personality is chaotic, reluctant to the superficiality of the contemporary world but extremely bond to the mystery of industrial and metropolitan realities.

SL: You’re also a contributing photographer of Getty Images Germany next to working with other companies. Some of your photographic opus is also vailable on EyeEm, your gallery is quite an impressive one. Do you consider yourself more of a photographer than an artist, or vice versa?

N: I don’t use to define myself a photographer but a visual artist because I use photography as a means of expression and I adapt it to my own creative needs. I reserve the technical approach to commercial and editorial photography, its purpose is to faithfully reproduce reality. 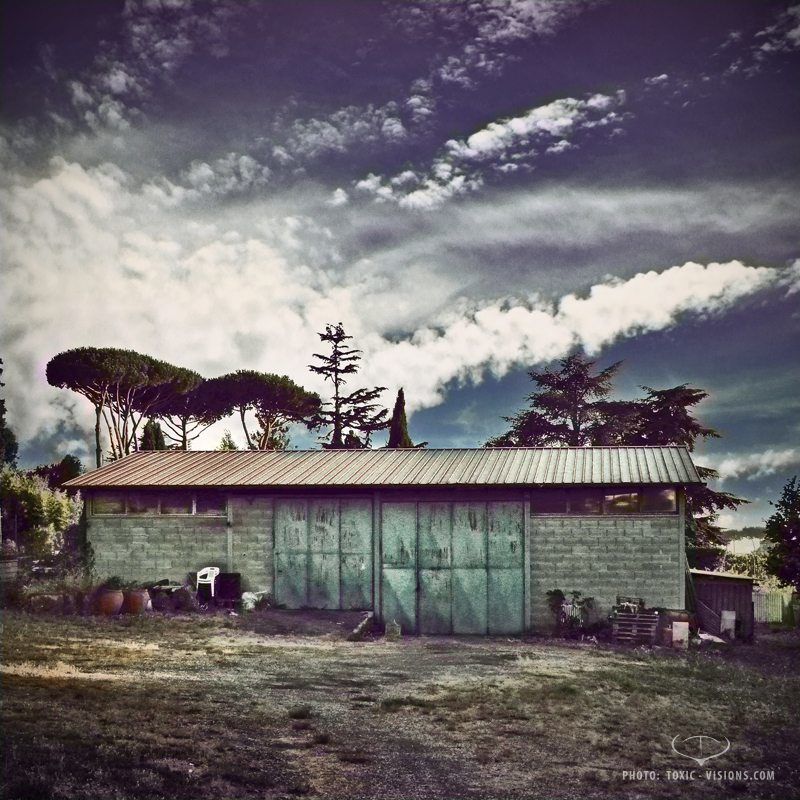 SL: Your works are often perceivable like fragments of a big visual story with lots of cinematic influences. Is film direction a field that you wish to explore one day as well?

N: My way of conceiving an artwork is definitely cinematic indeed. I idealise my subjects like paused frames in a scene of a movie, arranging elements like on a stage. My artworks are born from the union of a photographic realism, for which I use subjects photographed by me during my daily life, and pictorial irrealism, that may be digital or analogue. During the process of an organic painting, I use mixed media, favouring acrylic, oil, watercolour, inks, lipstick and even my own blood. I’d love to explore the field of short films, getting inspiration from Italian horror movies. Some kind of dark psychological steamy tales, dealing with surreal scenarios, blood and lust. It’s been fascinating me for years, but I never had the chance to approach it so far.

SL: What about upcoming projects? Maybe a book? Could be great!

N: Yes, I’d love to release a concept book collecting my main artworks and photography. Actually, the project that I have in mind would be to collect boards and audio tracks inspired by different abstract locations. I’ve also started to work on a series of dark t-shirts and accessories inspired by the esoteric and modern design. I expect to realise it somewhere in 2017.

SL: In today’s world of social networks where everything gets old so fast, how do you try to stand out? What’s the actual compromise between strategy and true artistic needs?

N: I prefer to stay in the background and move only when it’s worth it because I want to respect and honour my work and myself. So, I don’t think that being present at any cost is necessary for me, in my art as in my music. It would be a violence to yourself and to what you do to spread your art in uncomfortable and reduced situations that are only blocking your ideas and your self-expression. 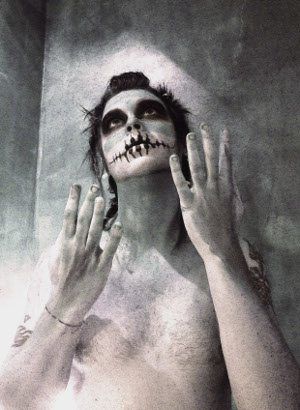 SL: Is there a work of yours that you’re particularly fond of?

N: One of the works that signed my artistic experience is definitely my painting ‘Pan’. This canvas is a mixed media painting representing the god of the wild and of the nature. The colours are warm and meticulously mixed. I used oil on dried brushes, inks and my blood and I created the frame using raw wood and nails. My aim was to arouse some kind of panic with the viewer. The subject is claustrophobic, chaotic and magnetic. This work was selected and exposed at the Contemporary Art Gallery of Savona, for the Espoarte exhibition back in 2003.

SL: You have worked with bands like The Psychic Force, Elyose, The Wet, BlackCore, Sin. Sin, Delirium Age, have taken care of the whole artwork of the Alfa Matrix tribute to The Cure as well as always managed visual for your main band – Helalyn Flowers. How should a band approach you for your art contribution?

N: Every band can ask for my collaboration, no matter how famous they are or what genre they’re playing. What I ask them is dialogue and an open mind. I’m not a technician but an artist. They will find in me a personality able to suggest, interpretate and revolutionise basic ideas. I’m not interested in simply executing other’s requests. I do need to do my own. Those who ask me must have the heart to rely on me. Usually, I ask for some previews of the band’s music, especially some from the new album which artwork I’m taking care of. This allows me to enter their own world, taking a byte of it and recreating the most appropriate mood.

SL: What can you tell us about your official site? We noticed that there is an ‘audio section’ in your factory!

N: Yes, everyone can contact us for both visual arts and music production (mixing, mastering, restoration and so on). You know, I’ve always had a complementary conception of music and visual art. In fact my Toxic Visions factory covers both the audio production of the albums, with the collaboration of Max from the AzTech Room audio division, and the realisation of the entire visual aspect. 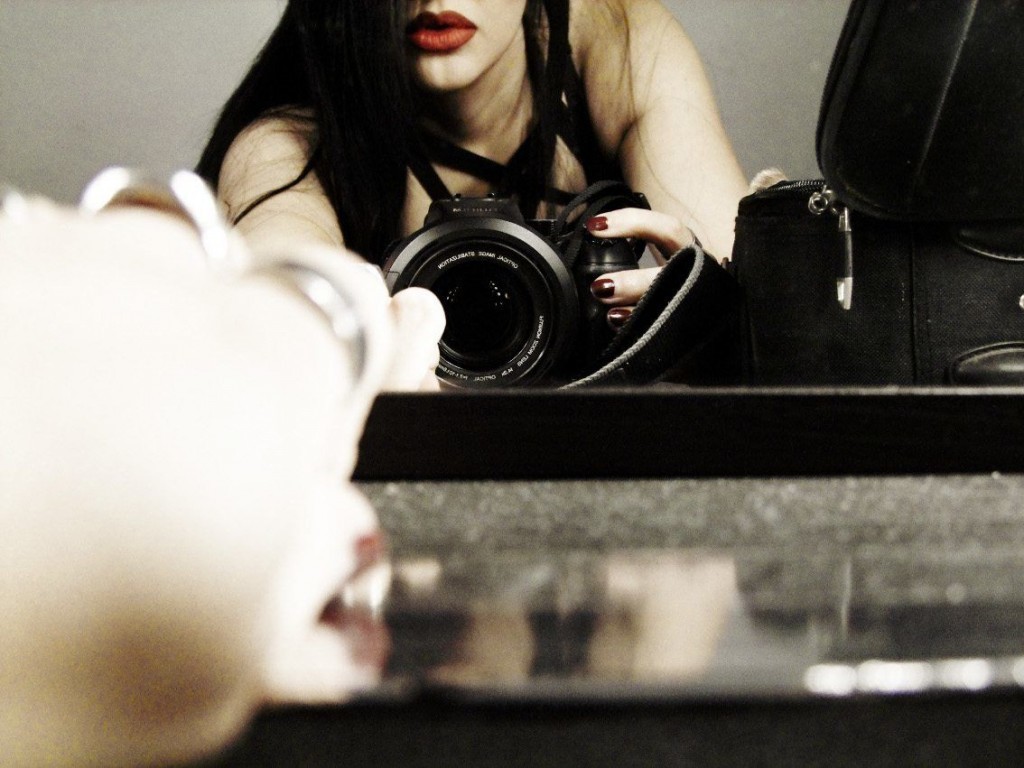 Toxic-Visions.com is essentially a point of reference for those who are showing some interest in my factory, although it shows only a highly concentrated selection of my works. Most of them are exclusively addressed to art exhibitions and/or printed media. Also, it includes selected news and interesting backstage reports. I love to reserve a little exclusive world to those who run into my exhibitions and publications.

SL: Thanks for the chat, keep up with the good work!